Our first peek at some of the interior art in the works for the controversial Before Watchmen was shown off this weekend, and we have to say, it's a little weird seeing the iconic, burned-out heroes stalking around in their prime.

A montage of art was shown off at Chicago's C2E2 expo this weekend, and the pic has now been released online.

We get good looks at pretty much all of our key characters, who all look weirdly younger—which makes sense, this being a prequel—but it may take some getting used to for Watchmen fans. 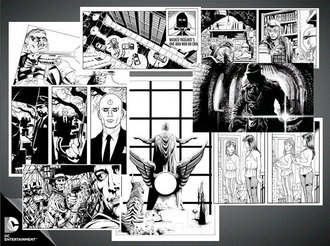 The grimy new look at Rorschach patrolling the underbelly of Manhattan is pretty great, as well as the Comedian spraying bullets and getting in on some of the action. Plus, Ozymandias still looks pretty pretentious, so it's nice to know some things never change.