We preview footage from Terminator Salvation and have massive spoilers!

Terminator Salvation director McG screened footage from the film and answered questions from the press on Wednesday in Hollywood, and SCI FI Wire was there. What follows is a detailed description of that footage, with massive spoilers! The Warner Brothers movie opens May 22.

The opening clip ran barely 30 seconds and introduced the post-Judgment Day world of 2018, as well as the various characters in the film: John Connor (Christian Bale), a foot soldier in the battle against Skynet; Marcus Wright (Sam Worthington), a fugitive struggling to remember how he ended up in the middle of a war zone; and Kyle Reese (Anton Yelchin), a scrappy survivor who pairs up with Marcus in order to navigate this futuristic wasteland. The most memorable shot from this footage was a longer version of a shot from the theatrical trailer in which Connor shoots a smashed Terminator in the head and later leaps into a massive hole in the ground.

Why you shouldn't ask Terry Crews about Terminator Salvation
Terminator timeline: We try to make sense of the futures past

In the second sequence, Marcus, Kyle and a young girl named Star (Jadagrace) arrive at a burnt-out 7-Eleven store. As they wander inside to look for supplies, a phalanx of refugees immediately surrounds them. As Marcus instructs his companions to leave, an elderly woman (Jane Alexander) insists they stay long enough to feed the girl. Before a decision can be reached, a giant claw crashes through the ceiling of the building and snatches up some of the humans. As the refugees flee the collapsing building, the camera pans up to reveal a towering robot: a Harvester.

Crowding into a car and a camper, some of the refugees attempt to flee. Marcus, Kyle and Star remain behind, watching in horror as the Harvester's massive guns easily vaporize the fleeing vehicles. Kyle steals into a nearby tow truck and enlists Marcus and Star to help him drive a gasoline tanker into the Harvester as it deposits its human cargo in a nearby Transporter ship, a hovering cattle-car-like vehicle. Reese shoots a hole in the tanker, and Star gives Marcus a flare to light the growing pool of gasoline. The gasoline tanker explodes and the 7-Eleven and its attached gas station erupt in a massive fireball. The trio speeds off in the fortified tow truck.

Before they get too far, they see that the Harvester is unharmed; it strides through the burning wreckage. It discharges two Moto-Terminators—automated motorcycles—from its legs. The two-wheeled vehicles pursue the tow truck, shooting at them with cannons. Kyle moves to the bed of the tow truck in order to fire at the Moto-Terminators. Kyle shoots at the Moto-Terminators while narrowly avoiding being killed himself. Marcus tells Kyle to drop the truck's hook; as it snakes behind them, it snarls one of the Moto-Terminators, causing it to crash. The truck approaches a bridge over a canyon. Looking from Marcus' point of view through the truck's windshield, we see a Hunter-Killer swoop in overhead, turn to face them and fire at the bridge to destroy it. 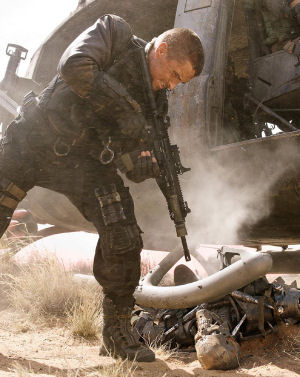 In the third scene, Connor and another soldier hover in a helicopter over a lake, dropping flares into the water to find someone. As Connor asks for a status report, a mechanical Hydrobot—like a six-foot armored shrimp—jumps up and pulls the man out of the hatch and into the water. Other Hydrobots attack the helicopter, causing it to crash into the lake. Connor exits the cockpit and stands atop the sinking helicopter, firing his automatic rifle at the Hydrobots. Jumping into the shallow lake, he shoots at the circling creatures as he makes his way to shore. Running out of ammunition in his weapon, Connor is defenseless as the last Hydrobot leaps toward him. Marcus appears from beneath the surface to intercept it, tearing it apart. Connor trains his handgun on Marcus; they are clearly enemies. Hands up, Marcus offers Connor a deal: He will help him infiltrate Skynet and save Kyle Reese. We see that Marcus' face has been partly blasted away, revealing a bit of metal under his cheek and forehead, a Terminator-like endoskeleton. Connor reluctantly gives him a locator, which will allow the humans to find Skynet's base of operations. Connor asks Marcus what he is, and he replies "I don't know" as he leaves.

The fourth and final clip was an extended trailer that introduces some of the remaining characters, including Michael Ironside (Starship Troopers) as Gen. Ashdown and Moon Bloodgood (Pathfinder) as Blair Williams, a pilot. Williams is a formidable soldier cut from the same cloth as Sarah Connor; she and Marcus share a romantic moment. We also see a brief glimpse of Kate Connor (Bryce Dallas Howard), who encourages her husband as he attempts to rally the human forces to attack Skynet.

We visited the set last year and have heard details of McG's vision of the film on previous occasions, so the footage offered few surprises. But the centerpiece action sequence is beautifully executed and exhilarating to watch. The footage also showcased McG's desaturated, contrast-heavy visual style. Because the movie is still in post-production, the footage contained temporary or unfinished visual effects, but it nevertheless conveyed the director's singular vision and energy and wonderfully captured the excitement to be expected of the finished film. Judged by the early scenes, Terminator: Salvation promises to be one of 2009's most exciting thrill rides. It remains to be seen whether the film will honor the series' philosophical themes or carry the emotional depth of the first two movies. Stay tuned!