This week, Atari let SCI FI Wire go a couple of rounds with Chronicles of Riddick: Assault on Dark Athena, the sequel video game to Chronicles of Riddick: Escape From Butcher Bay, a title that bore the unique distinction of being both a movie tie-in game that didn't suck and an award-winning stealth shooter.

In Dark Athena, you reprise the role of Richard B. Riddick, the universe's number-one killer. The game picks up right after the events of Butcher Bay, with Riddick's having just escaped the triple-max slam only to be shanghaied by a massive warship named Dark Athena. After evading a boarding party, you stow away aboard the vessel and then go on a killing spree that would make Jason Voorhees proud, saving innocents from some unsavory experimentation in the process.

While Dark Athena offers gameplay almost identical to that of the first game, it has a distinctly slicker look, featuring chromed-out ship environments bathed in darkness, perfect for a fugitive with a 20-menthol Kool shine job. Navigating the vast sections of the Athena will feel like taking a walking tour of the Death Star.

Riddick's signature weapons—a pair of curved, serrated Ulaks—will provide great sport for those players who like their victims sliced, diced and generally eviscerated before they're dropped like blood-spattered rag dolls on the floor. The stealth kills Riddick can execute are limited but so intricate you'll end up feeling like you have several, rather than a handful of, moves in your arsenal.

Shooting is standard, but the AI is a cut above Butcher Bay's. You're steeped in bloody, visceral combat at almost every turn, fighting several opponents who attack you from different angles. The game also demands you think like Riddick. Can't access a room protected by a fingerprint ID pad? Set off the alarm and summon a guard who can. In this case, corpses can open doors as well as the living. 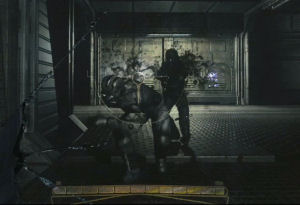 Vin Diesel has one of the most distinctive voices in Hollywood, and the game developers have smartly leveraged this, treating players to stretches of internal monologue in his voice while you navigate ventilation shafts and hallways. Riddick has something to say about every situation he's in. Most of the time, that's a good thing. Occasionally, you'll find yourself groaning at lines like "My options are zero and dropping all the time." While Riddick's math may be off, his aim isn't.

Dark Athena iincludes several multiplayer options, including the aptly named "Pitch Black," which takes place in a dark environment and pits a lone player as Riddick against other players who work cooperatively to hunt him down. I suspect this will be the only time you'll hear more F-bombs than in the single-player campaigns.

Fans of Chronicles of Riddick: Escape From Butcher Bay who cried foul when they discovered it wasn't playable on the Xbox 360 can rejoice. The original game, complete with remastered graphics, is included on the same disc with Athena, ready to play on next-gen consoles. That alone almost makes this game package worth the price of admission. Based on the atmosphere and action of the levels we played, Dark Athena should easily make up the difference.