Shadow Complex is getting rave reviews across the board, and it launches today on Xbox Live Arcade, based on the novel Empire from SF author Orson Scott Card and written by comic-book writer and Star Trek novelist Peter David. And we learned there may be a movie in store (more on this later).

SCI FI Wire got a preview of the game from Chair Entertainment's Geremy Mustard, who told us this modern side-scroller was "all about exploration, punctuated by moments of combat."

So now that they're casting Ender's Game, who should be hired?
Studio defends Ender's Game against Orson Scott Card controversy

Card actually licensed the property from Chair and worked closely with both Chair and David. He's planning an Empire trilogy, with the second novel being released this December.

Mustard told me that the game is an original story, running parallel to the novel, but that it sets up new plotlines and characters for the upcoming book. Of course I had to ask about a possible film. And the answer is yes. They even got Oren Moverman (The Messenger, I'm Not There and Velvet Goldmine) to write the script. It was at Warner Brothers for some time, but Chair now owns the rights. They have a deal with Epic, so keep your fingers crossed.

And now the game. The premise for the Empire universe is that a radical militia group believes that America isn't imperialized enough and has come up with a plan. They are going to cause a second civil war to divide the country and reunify it with their own government style. 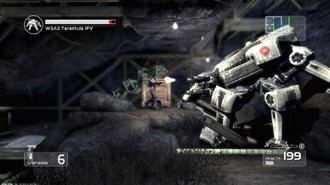 The game begins in the middle of a battle on the streets of Washington, the first step of the war plan, but quickly switches to a battle-free woodland setting. A young man named Jason Fleming is out hiking with his girlfriend. When they are separated for a moment, the militia group kidnaps her, believing she's FBI or CIA. (They have just implemented their master plan, having blown up the White House and killed the vice president, so they're understandably a little jumpy.)

Jason follows her to the organization's underground complex. As you run through the joint, you realize that the only way to fight back is to use the renegade group's own weapons against them. You may start with nothing but a flashlight and some climbing gear from your girlfriend's dropped backpack, but you quickly get some seriously cool toys to play with.

My favorite is the foam gun. This drool-worthy weapon allows you to cover your enemy in blue foamy goodness and freeze them for a few moments, stick a grenade to the goo and make a supersized explosion. Or shoot it at a wall to create a ledge to jump on. You also get a pretty nifty physics-based grappling hook. And the game is all about powering up and getting new goodies ... I mean equipment ... and most of your experience comes from exploring the massive world.

Mustard explained that he always liked the dichotomy between high tech and low tech, citing the G.I. Joe and Cobra conflict as an inspiration from his childhood. And he really wanted to update the side-scroller. "It's a classic genre," he said, "and no one's updated it. What if there were no first-person shooters for 15 years?"

The graphics look fantastic, especially for an XBLA game that costs $15. Mustard said that he loved games like Super Metroid and Castlevania, and they are similar in style. Even the background shows how much thought went into this. I noticed a modified flag on the walls in the compound, and Mustard said that the designers studied Nazi propaganda, which had a graphical element to it.

Mustard added that Restoration is designing this post-second civil war takeover like a Hollywood film, and marketing was the main focus. For instance, a guy in a mech suit may not be as effective as a guy in a tank, but it had much more visual impact. And from a revolutionary marketing standpoint, visual impact is the thing.

There are achievements, leader boards, boss battles and tons and tons to explore. And lots of backtracking to reach areas you couldn't access at the beginning of the game. Maybe it's just me, but finally being able to open that door or reach that ledge that I couldn't get to earlier is incredibly satisfying. People are calling this the best game this summer, and after a few hours of play, I have to agree. Definitely worth a purchase.

(For a another review, check out our sister site fidgit.)