We preview the Transformers: Revenge of the Fallen game

Tag: Transformers: Revenge of the Fallen

SCI FI Wire got a sneak peak at the upcoming video game based on Michael Bay's upcoming Transformers: Revenge of the Fallen movie late last month in San Francisco and saw gameplay and graphics on the Xbox 360. We also spoke with the team from Luxoflux, the game's developers.

You can play as either an Autobot or a Decepticon, and designers have completely overhauled the mission system from an earlier incarnation. Gameplay is nonlinear, and you can jump into any mission at any time. All the characters from the upcoming film are here, and for the most part you can pick your favorite and play as that Transformer for the entire game. (Spoilers for both game and film ahead!)

The game's designers have also revamped the transformation system, telling us that it is no longer just about jumping from robot to vehicle, but that you can do it seamlessly and quickly during gameplay.

In one of the moments we saw, Bumblebee carries Sam Witwicky (not a final version of Shia LaBeouf's voice) through the streets. As he transforms from car to robot, you can actually see how he moves Sam from his hand in robot form to the back seat in vehicle form.

Autobots and Decepticons now have a multiplayer option. You will be able to choose among "deathmatch," "team deathmatch" and, everyone's favorite, "capture the flag." We were also promised "a host of other options," though the designers wouldn't reveal what those might be.

The storyline was explained as well: Megatron was killed at the end of the first film, and the war is over, ... but, as the title suggests, not really. After the war, the Autobots team up with humanity to clean up any remaining incursions, but more and more seem to be happening.

Ironhide is the first on the scene in Shanghai (his special ability is to drop turrets). We are told that we are getting a live feed from Shanghai, and we watch as he kicks Decepticon butt. We see everything from Ironhide's perspective in this angle, though we were told that there are three preset camera options for gameplay and that you can switch easily among them. On the "heads-up display," you see a timer in the upper right-hand corner (all missions are timed) and a map on the right side as well. The upper left is a point indicator, and you have an overdrive meter at the bottom of the screen.

You are given a primary and secondary weapon, and though you never have to think about ammo, you must not allow the weapons to overheat. Again, all missions are timed, so it can present a problem if you have to sit and wait for the weapon to cool down. 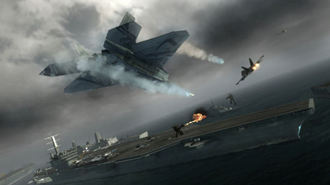 Your overdrive meter is something else to keep an eye on. The developers called it "mass destruction mode." When it's full, it keeps you from overheating for a period of time, which helps in the timed missions. You get points for your work, and you can take them back to the Autobot or Decepticon hub to upgrade your faction. Just completing the mission gives you points, but you get more for things like not allowing Sam to be damaged, completing the mission in the shortest time, etc. You can display your prowess on the leader boards.

The developers stressed the seamless transition between forms and talked about the ability to hover, which is new for this game. We also got a sneak peek at the largest boss so far in Cairo, though it was indicated that this was not the biggest of all. We've been informed that he's eight times the size of the Demolishor, the Decepticon seen in the movie trailer in Shanghai.

As in God of War III and X-Men Origins: Wolverine, the trend seems to be gigantic enemies. Titans in God of War, Sentinels in Wolverine and giant robots here. The Demolisher looks like a huge transforming building with backhoes and tractors as arms. We also saw a bit of a flying mission that involved an explosion on an aircraft carrier.

The graphics look pretty incredible, and the designers were practically jumping out of their seats in excitement. Though we didn't get to play, it looks like a lot of fun. The designers told us that they had met with director Bay and added that there were a lot of secrets they weren't allowed to reveal because they are closely related to the film. The developers also said that there would be quite a few unlockables, including concept art, comic-book covers and skins. Hasbro opened its vaults for some really cool secret extras.