We preview footage from Astro Boy '09

Bowers (Flushed Away) calls Astro Boy "the first big-screen incarnation of the character. ... It's a classic superhero origin story, really. You find out what Astro Boy is and where he comes from in the story. And it's hard. It's a very emotional story."

9 anime things that Astro Boy did first
Astro Boy is for kids who like death, abandonment, betrayal

Bowers added: "I was keen when I started this film to have something to hang all the action/adventure and the comedy from. So I really went back to the father/son relationship between Astro and his father. And for those of you who don't know the story too well, Astro Boy is a robot, created by a brilliant scientist to replace his dead son, and ... this film explores all the problems that come with attempting something like that. So it's mainly an action [adventure] ... [and] it's an emotional story. It's an action-adventure story, there's a lot of comedy in it as well."

The original Astro Boy TV series, based on the 1952 manga by Osamu Tezuka, is often credited as the first anime-style film. Like the original series, the new English-language movie centers on the origins of the robot boy who was created by a scientist who had lost his real son. Freddie Highmore voices Astro and Kristen Bell voices Cora, a street urchin who befriends him.

Bowers and producer Maryann Garger will debut some of the footage we saw at Comic-Con in San Diego next week, but here's a first glimpse.

In the first clip, we witness the birth of Astro Boy. Dr. Tenma (Nicolas Cage) is working feverishly in his lab as assistants watch, concerned. On a table, he unrolls plans for the boy robot to replace his dead son. He uses lasers to dismantle missiles for parts. His son's red ballcap is the source of a hair for DNA.

A boy-sized robot endoskeleton lies on the table. Light beams play over it, adding the outer layer, which looks just like Toby.

Dr. Elefun (Bill Nighy) brings in a case. An assistant tells Elefun that Dr. Tenma hasn't eaten or slept for days. Elefun says: "If you lose your son like that and you don't go crazy, you are not a human being." 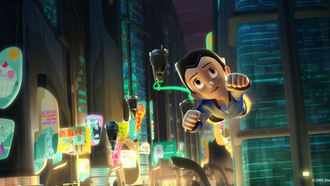 In the case is the blue core, the power for the robot. Tenma wants to put it into the robot. Elefun warns him not to expect too much.

Hoses snake down from the ceiling, attach to the boy, haul him up, suspend him in midair. Blue lightning zaps all around, the robot falls, smashes equipment, lies inert.

Then his hand moves with a mechanical sound. The robot arises, eyes glowing eerily blue. The robot's point of view resolves into Tenma and Elefun.

It gets up, staggers, tries to find its balance, falls into Tenma's arms: "Dad!"

He picks him up and carries him out.

In clip two, we see Astro is on top of a building, surrounded by "yellow jackets": one-man flying craft.

"After Dr. Tenma takes Astro home, and they go through a sort of normal day, it didn't work out quite the way he expected," Bowers explains. "Astro's a little bit different from Toby. [Tenma's] disappointed. Yeah, he ends up eventually breaking the truth to Toby that he's not his son. He's a robot who looks like his son, and he doesn't want him anymore, and Toby is heartbroken. And he flies out of the apartment. And when we catch up with him, he's sitting, sort of coming to terms with the truth about what's just happened. At the same time, our villain in the movie, President Stone, is wanting this blue core energy power source to his own ends, and with Astro, ... he's sort of tested out his powers and found he can fly, he's shown up on the military sensors. So the military is going to try to get the blue core power source back."

In a control room, President Stone (Donald Sutherland) orders them to capture the robot.

They give chase, shooting green tendrils out to capture him. Astro rockets off, around and through the city, with the craft in pursuit.

The glass visors on the helmets of the pilots register "???" or "!!!" or words about their bodily functions.

Green tendrils finally capture Astro, but he flies off, trailing all of the craft behind him until they wedge into the crevice of a large building. One pilot falls out, and Astro flies down to save him.

At the end, the president orders the "Spirit of Freedom" to attack: It's a massive warship that rises from behind a building and blasts Astro repeatedly until he falls, hurtling out of Metro City and down to the surface below.

Clip Three, Bowers explains, begins after Astro has landed on the surface of Earth. "And he has to, sort of, make his way. A lot happens along the way. He runs into a bunch of kids who he befriends. He meets a guy called Ham Egg [Nathan Lane], who he thinks could be another father for him. But eventually he has to make a choice. He gets taken back to Metro City. He has to make a choice whether to help the people of Metro City or just fly away from the people who haven't treated him so well. And this is after Astro makes a choice."

In the meantime, President Stone has activated the Peacekeeper robot, which is sort of Astro's nemesis toward the end of the movie. "It's an 8-foot-tall robot that has the power to absorb anything around it. So, for example, in this room, he would suck up the chairs, and if any of you had guns, it would take your guns, and it would be able to use them against you. And the last time we saw it, it had grown to about 12 feet by absorbing stuff around him. So Astro flies into the city now to confront this. And it's also absorbed President Stone, which is why it's speaking with Donald Sutherland's voice. This is quite near the end."

Astro is on the streets of Metro City, faces down the giant, villainous robot Peacekeeper, now voiced by President Stone and gigantic as a result of having absorbed ships, buildings, etc. Its arm is the "Spirit of Freedom."

In a violent melee, buildings crash, Astro is fired on and fires back, zooming around, even using his famed machine-gun butt cannons.

Cora and kids below, meanwhile, commandeer Ham Egg's flying car, zoom up and save Astro as he's about to be stomped on by the Peacekeeper.