We previewed the first 46 minutes of Pixar's Up, and it's all here

Pixar has been touring the country, screening the first 46 minutes of Up, its next full-length computer-animated film, more than three and a half months before its theatrical release date, and SCI FI Wire was there during presentations at New York Comic Con last weekend and at the Walt Disney Studios lot in Burbank, Calif., on Tuesday.

With arguably one of the hardest concepts for a Pixar film to sell, Up tells the story of 78-year-old Carl Fredricksen (Ed Asner), who sets out on the adventure he always intended to take with his late wife, Ellie. Tying thousands of helium balloons to his house, he lifts off to find Paradise Falls in South America. Only he's unaware that he's brought along a co-adventurer in the form of 8-year-old Wilderness Explorer Scout Russell (Jordan Nagai).

Director Pete Docter and producer Jonas Rivera hosted the screenings in New York and Burbank and confirmed that the film was being scored by Oscar-nominated composer and frequent Pixar collaborator Michael Giacchino (Fringe, Lost). The film will be mixed at Skywalker Ranch starting this month. Here's what we saw. (Massive spoilers ahead!)

Up opens with an old-time newsreel that tells the story of famed world adventurer Charles Muntz (Christopher Plummer). Together with his trusty dogs, the Howard Hughes-like adventurer traveled the globe in his dirigible, The Spirit of Adventure, in hopes of uncovering new and exotic places. Returning triumphantly from Paradise Falls, he claims the exotic site is filled with actual monsters and brings back the skeleton of one such creature. But his claims are quickly debunked, and Muntz vows to return to Paradise Falls to get more proof and restore his tarnished reputation.

A little boy sits in a movie theater watching the newsreel, wearing his own explorer flight goggles, enthralled with Muntz's tale. As he walks home with his own humble balloon, little Carl Fredricksen hears an excited voice coming from an abandoned house. Inside, he discovers a gap-toothed little girl who's rigged up the battered house to look like The Spirit of Adventure for her own imaginary expeditions. The girl, Ellie, overwhelms shy Carl with her ebullient personality and enlists him in her adventure club with a medallion fashioned from a grape soda bottle cap. She challenges Carl to retrieve his balloon from the second-story rafters. Carl winds up with a broken arm. But Ellie visits him and shares with him her super-special "My Adventure Book," with a blank section that she intends to fill with her own mementos and adventure stories. She makes Carl promise to help her get to Paradise Falls. Carl is smitten. As she leaves, she says, "You know, you don't talk very much. I like you."

Clearly soulmates, Carl and Ellie grow up and marry. The next few minutes play out in a montage without any dialogue: Carl and Ellie buy the old house, fix it up, share picnics and daydreams and create an "Adventure Fund" in a glass bottle, which ends up getting spent on flat tires and hospital bills. When the couple try to become parents, Ellie's dream is dashed. Pixar captures the depth of the tragedy with simple images and music.

Ellie and Carl grow older. Carl is reminded that he never fulfilled his promise to Ellie. He buys plane tickets to Venezuela, but Ellie falls ill and ends up in the hospital. We see Carl, broken and alone after her funeral. Fade to black.

Carl wakes, alone in his old house. Creaky, cranky, his life is full of rituals that tie him to his beloved home and his memory of life with Ellie. Every knickknack they've collected, every piece of furniture placed, remains exactly as it did when Ellie was alive. Outside, construction workers are building high-rise buildings on either side of the last remaining house. 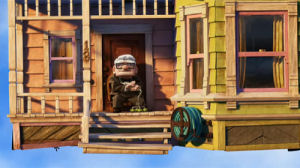 Russell comes to the door. An annoying but determined Wilderness Explorer scout, he needs a "helping the elderly" merit badge to become a senior scout. He wants to do something to help Carl.

Meanwhile, Carl refuses to sell his property to the developers. They can have the house when he's dead, he says. But when a backhoe smacks into Ellie's mailbox, Carl grows enraged, knocking a worker on the head with his cane, drawing blood. Carl is in court. The developer presses charges. Carl must move to the Shady Oaks retirement home, leaving his beloved home.

But no. On the morning the Shady Oaks representatives come to pick him up, Carl unfurls 10,000 helium ballons, which rise into the sky and pull Carl's house with them. Carl steers the house with wings made from curtains and bed sheets, setting a course for South America.

Deep in the blue sky, Carl settles in. There's a knock at the door. Huh? He opens it. There's Russell, on the porch, gripping the rail in terror. Can he come in? No, Carl says. The door slams. It opens. Oh, all right. Russell runs in. So begins the oddest pairing in Pixar storytelling history.

The house descends. Through the fog Carl and Russell see massive rock formations. The house sinks lower, skimming the ground. Carl and Russell are thrown out of the house, which begins to drift away. Carl grabs a garden hose, stopping the house's ascent. Russell grabs Carl's leg. The two of them stand at the precipice of a cliff, holding the house like a parade balloon.

In the distance, Carl recognizes Paradise Falls. They've made it. But the only way to get there is to walk around the edge of the plateau, dragging the house after them like a kite.

Along the way, Russell befriends a giant, colorful bird. He calls it Kevin. Not long afterward, Carl, Russell and Kevin hear a voice in the fog that says "I smell you." Confused, they think they see a human in the distance. Carl tries to communicate with it, but it just responds again with "I can smell you." As they get closer, they see it was just a rock that looked human. Suddenly, bounding out of the fog comes a rather dopey-looking dog with a collar. The voice is actually coming from the dog. The collar seems to interpret the dog's thoughts, translating them into words. The dog's name is Doug. They set off for the falls.

The footage upends all expectations about what the film is actually about. What looked like an odd-couple adventure in the sky on the onesheet is clearly a whole lot more. Poignant, very funny and beautifully designed and rendered (as always), Up is shaping up as one of Pixar's best.

In particular, the opening montage is a master class in emotional, visual storytelling. Docter effectively pulls the viewer into the life of the couple in the span of only a few minutes, and Ellie's passing actually elicited tears from more than a few in the audience.

The subsequent shift to Carl and Russell and in tone to comedy is equally heartfelt and genuine. Talking dogs, floating houses, promises to be kept: Only Pixar could bring all of these disparate elements together with any kind of cohesion, and I can't wait to see how they make it all fit.