We saw the pilot, and here's why we think you're going to like FlashForward

We got an early look at ABC's upcoming sci-fi series FlashForward on Wednesday night at Disney/ABC's mothership in beautiful downtown Burbank, and while we can't give you a proper review, we can tell you this:

We were asked not to divulge any spoilery details or to tell you much about what we saw—which was the one-hour pilot episode—but we can tell you what it's not.

It's not Lost, though it has elements of that show: a high-concept sci-fi premise, told intimately through the lives (present and future) of about 10 main characters, as well as a deep, abiding mystery that will be unraveled over the course of the first season and subsequent seasons right up to the last minute.

It's not The X-Files, though it has an FBI agent (Joseph Fiennes) at its heart and a procedural element to its storylines, with potential criminals and other bad guys and creepy weirdness here and there.

It's not ER, Fringe, Heroes or any other hit drama, though it shares elements with all of those shows, including a main character who's a surgeon, weird science and people who may or may not have access to strange visions.

No, it's that rare thing in television: something completely new. And, at least judging by the big-screen Blu-ray version we saw, it will look absolutely gorgeous, not to say epic, for a TV show.

Based on the novel by Canadian SF author Robert J. Sawyer, FlashForward (not Flash Forward) begins when every person on Earth blacks out for 2 minutes and 17 seconds, during which time each has a vision of his or her future six months from now. 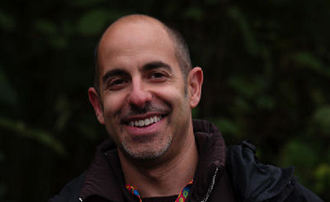 "There have been comparisons to Lost, ... [that the show is] a Lost replacement," executive producer David S. Goyer told an audience on Wednesday. "[But] it was written as a spec and originally was even anticipated to be an HBO show. So it wasn't written at all for ABC or to be a Lost replacement. And I think the comparisons are accurate in that we also have a very large cast and are telling a very big, cinematic, ambitious story, but I think once you see the pilot ... that's where the similarities end."

Goyer and show runner Marc Guggenheim are big TV fans themselves and promised that they have a plan for the show that will play out in season one and then in subsequent seasons in a way that is deliberate and not vamping. Seriously.

For one thing—and this is a spoiler we can reveal—the first season is designed to reach a kind of climax on the very real date of April 29, 2010. There's no getting around it.

So what happens if the show does get picked up for a second season?

"Well, obviously, we're not going to tell you that right now," Goyer says with mock exasperation. "You know? But I will say that at the end of the first season, the promise of the first season is all the glimpses of the future that you've seen of our series regulars, that we've teased, we will know whether those particular futures have come to pass or not.

"In terms of what happens next, we're not going to tell you; that's part of the fun," Goyer added. "And part of the fun in the breaking of the stories is also subverting expectations. Because you plant this big flag saying, 'OK, April 29, six months from now.' I think it's natural for the audience to assume that we're just going to vamp until episodes 20 and 21, and then a bunch of s--t's going to happen. But—f--k you guys—by the end, it will become evident. ... We've already ... finished the first seven episodes, and it will become crystal clear by the end of those seven episodes that that's not what we're doing. And ... we're never going to lie to the audience. We're going to play by the rules. ... But what we'll tell you in the pilot is, you haven't seen all the chess pieces yet, and you don't know what all the rules are."