Ronald D. Moore, the executive producer of Battlestar Galactica, revealed more possible spoilers for the award-winning show's upcoming final episodes, including what to expect from the recently revealed fifth Cylon.

And the Cylon—that is, the actor who plays the Cylon—speaks as well. (Massive spoilers ahead!)

In last week's episode, "Sometimes a Great Notion," Ellen Tigh (Kate Vernon), the late wife of Col. Saul Tigh (Michael Hogan), was revealed as the final Cylon. Vernon told reporters in a conference call on Wednesday that Ellen will turn up in most of Battlestar's remaining episodes, making life even more hellish for Saul, who poisoned his wife in the third-season episode "Exodus, Part II."

Moore, speaking in the same conference call, elaborated on what to expect as the fourth and final season winds up, as well as the deliberations that went into Ellen's choice as the final Cylon. Friday night's episode, "A Disquiet Follows My Soul," airs at 10 p.m. ET/PT.

Ron, at what point did you decide that Ellen was the final Cylon, and why did you pick her?

Moore: I've been trying to figure out exactly when I picked Ellen, and I'm not quite sure. It was sometime in the third season. I think the option of presenting her as one of the final Cylons was sort of kicking around for a while, but we didn't really have an intention of revealing all four of the final four Cylons in the season finale until we were breaking that actual episode. So there wasn't really a focus on delineating exactly who the final five were for quite a while.

But I think Ellen's name was kicking around the office in terms of "Well, who could the remaining Cylon be? Maybe it would be Ellen." And we put in the name and said, "Yeah, that might be cool. Maybe we'll get back to that someday." And it wasn't really until after we had decided to reveal four of the final five in that season finale that it became a more pressing question. And then, in between the two seasons, we went on a writers' retreat and talked about everything in detail, and Ellen was the primary candidate to be the fifth Cylon.

But we were very open to a wider discussion. "Well, we think it's Ellen. Let's say she's the leading candidate, but who are the others?" We talked about other possibilities, but none of them really held water and none of them made sense and none of them really gave us much, so we stuck with Ellen. And I would say it works primarily because of her relationship with Tigh. It really anchored that couple as something that was very special, and I liked the fact that Ellen as a character was an off-camera presence right from the beginning of the show, of the miniseries. We started hearing about Tigh's wife, and it was one of his key, defining characteristics. So we knew that she was important in the mythology of the show.

And I liked the idea of saying that this couple had been together a very long time, that this couple was something special, that they were this eternal romance and eternal love, which I really thought was interesting and cool. And it completed the framework of the final five. It just fit. It all kind of fit. It also made the fact that Tigh had killed his wife back on New Caprica even richer and more complicated and filled with more ironies and more conflicted feelings about what was happening and what the story was. So that's essentially how the process went. 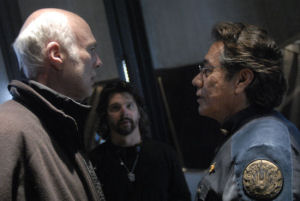 Who was the first runner-up among the other options?

Moore: Oh, I knew you were going to ask that! We just kind of threw them all out. I don't know that there was a second. ... We talked about Dualla [Kandyse McClure]. We talked about Gaeta [Alessandro Juliani]. We talked about all of our regulars, and we dismissed Eddie [Edward James Olmos, who plays Adm. Adama,] and Mary [McDonnell, President Laura Roslin,] pretty quickly, because we'd said, "What if it was Adama? What if it was Laura?" I felt that took something away from the show, that that would actually hurt us, because once you said Adama was a Cylon it'd just feel like part of the journey itself wasn't right, and it didn't have the same meaning I wanted it to. So they fell out early.

Kate, how hard was it to keep this a secret?

Vernon: There were waves of intense agony and frustration, and then I would completely forget about it. I had two years to ride this. ... I think we decided that it was around ... that amount of time. We're not exactly chronologically sure, but it's been a really long time. So within that enormous length of time, I did actually forget about it for a minute. But, for the most part, this was something I wanted to talk about desperately just because it was such an honor to have been given this role. When they killed me off, I went up to Ron and I looked him straight in the eyes, and I said, "Is there any way I can come back? Is there any way of coming back?" He just looked at me very carefully and assuredly said, "No."

So I was done in Ron's eyes, but in my heart I personally had a love affair with Ellen as an actress, and with this show. So I never let go of it, and Ron can attest to that because I called him several times. And thank you, Ron, for taking all of my phone calls. 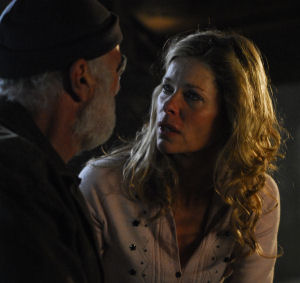 Were there any special precautions taken to keep the secret a secret?

Vernon: What was asked of me—and I understood it—was really to disappear, to go invisible. My character came back a few times, and when people found out that I was working in Vancouver on Battlestar, it was, "Yeah, of course, I'm coming back to torture my husband who killed me off. Why else would Ellen be back?" That's her thing; she's coming back to torture her husband. So that's how I played it off, and I know NBC and Ron asked me just to lay low, really, and to honor and respect this enormous hit that was going to happen eventually. Part of it was a thrill. Of course I was going to keep this quiet. This was one secret you wouldn't want to blow.

Kate, now that we know you're back for most of the final episodes, give us some sort of preview as to what Ellen will actually be up to.

Vernon: Yeah, I'll be talking. I'll be walking and talking. I get to reunite with my husband in the good old-fashioned way that they do. Let's see ... I can't really talk too much about that without giving [something away]. Right, Ron?

Moore: Just saying that you reunite alone is probably enough.

No, that new Battlestar Galactica series from Mr. Robot creator won’t be a reboot after all
20 gay characters we love from sci-fi movies and TV

Moore: The trick is that from now until the end of the series it's pretty much one continuous story. And so we don't want to give any of the building blocks away, because then you'll kind of know where the current story arcs to. So we're just trying to be as opaque about what's left as we can.