We visit Zombieland, where killing the undead is fun

An Indian trading post sits in the night along a quiet road somewhere between Arizona and New Mexico. A group of four travelers approaches the store, their yellow Hummer H2 parked outside like a beacon in the rural landscape. Three of the travelers hang back while a man dressed like a cross between Indiana Jones and Clint Eastwood steps up to the door, pauses just outside, levels his shotgun and rings the cowbell hanging overhead.

A guttural growl comes from inside. The shop's proprietor, now one of the flesh-craving undead, runs toward the door, steps across the threshold and meets a sudden and violent end as the cowboy fires. The zombie flops backward onto the ground (in a bloodless death; squibs will be added in post-production).

This is Zombieland, USA, and our hero is Tallahassee, a natural-born zombie killer played with cheerful nonchalance by Woody Harrelson. Grinning at his latest kill, he nods for the rest of the group to enter. They are played by Jesse Eisenberg, Emma Stone and Abigail Breslin, and, like Tallahassee, each is named for the place they're from: Columbus (Eisenberg), Wichita (Stone) and Little Rock (Breslin).

It's April 1, and SCI FI Wire is really in Rutledge, Ga.—doubling for the Southwest—on the set of Zombieland, the upcoming post-apocalyptic horror comedy from first-time feature director Ruben Fleischer. The movie is shooting all over the Peach State, one of many productions taking advantage of the state's new 30 percent tax break. (Rutledge is about 50 miles southwest of Atlanta.) We visited the movie production just a week before filming wrapped.

Best described as a zombie horror-comedy road movie, the film was influenced by such genre classics as Zack Snyder's Dawn of the Dead remake, 28 Days Later, Shaun of the Dead and even the classic road comedy Midnight Run, the writers and director said.

Originally conceived more than five years ago as a television series by writers Rhett Reese and Paul Wernick (who are also writing the forthcoming Spider-Man spinoff, Venom), Zombieland underwent numerous changes during a long development process before Sony finally decided to turn it into a full-fledged feature film. After getting a green light, the writers cooked up a new draft, cobbling together portions of their first episodes and taking full advantage of an R rating to let gore and naughty language flow freely.

To start off our visit, director Fleischer gives us an introduction to the project. "It's a comedic look at the post-apocalyptic zombie world," he tells a group of visiting reporters. "It's a band of survivors that kind of met along the way. At first, Columbus and Tallahassee meet up, and then they meet [Wichita] and [Little Rock]. They band together on this journey towards Los Angeles to go to an amusement park called Pacific Playland."

Columbus and Tallahassee are the odd couple of the zombie apocalypse. With very different survival tactics, each has managed to remain among the shrinking group of living people. "Woody's definitely created a larger-than-life movie character with Tallahassee," Fleischer says. "He's like a real, weird cowboy kind of post-apocalyptic zombie bad-ass. Columbus is the classic video-game nerd, the kind of a guy who has a [lot] of phobias. He's OCD. His fears in the old world are what allow him to live in this new world. The reason he's alive is because he's just a giant coward. So it's really two opposites that come together and go on this journey."

Adds co-writer Reese: "In Zombieland, you can't pick the people you're going to end up hanging out with. It's just whoever you run into, so it's this excuse to force four disparate people with really different personalities together. That's sort of the joy of this movie: watching these four very different characters bang into each other in small spaces. All the fun action and people getting their heads blown off is just gravy." 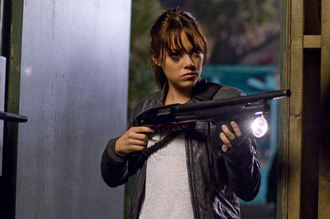 Despite Fleischer's inexperience as a feature director, all involved seem pleased with the progress, which proceeds on schedule and with minimal hiccups. When Fleischer powers up his laptop to show off a reel of assembled footage, he can barely contain his excitement. The scenes include a soccer mom fending off a group of zombie little girls dressed as princesses, the flesh-craving brats bouncing off the vehicle as the minivan races across a grass field. In another bit at an amusement park, Harrelson clings to a swing ride, spinning in circles and letting out a cowboy howl as he machine-guns down zombies. In a third, Wichita and Columbus attack from a free-fall ride, bouncing up and down in between zombie kills. The action-packed reel gives a quick sense of the movie's spirited comedy/action/horror cohesion and appropriately whets the appetite for more.

Although Fleischer and the writing team hope Zombieland will be enjoyable to both mainstream audiences and aficionados of George A. Romero's classic slow-moving zombies, all three admit that they favor recent, fast-moving-zombie material. "The zombie genre got really, we felt, reinvigorated with 28 Days Later and [Snyder's] Dawn of the Dead, when zombies became fast," says Reese.

The locale of this day's shoot, the Indian trading post, looks incredibly authentic, filled to the brim with the kind of tchotchkes that one would expect to find in such a shop: brightly painted toy drums, Indian headdresses, pink cowboy hats and plenty of turquoise jewelry. "They put [this] together in two days," Fleischer proudly says. And yet, by night's end, all that hard work will be smashed to bits in a moment of playful demolition.

"This is midway through their journey from Texas to California," Fleischer says. "They've pulled over at this Kemosabe's trading post, and they go in just to see what's in there and stretch their legs. A zombie attacks quickly when they come in. They kill him, and then they go in. ... Jesse will accidentally knock something over [after] Woody gives him a punch in the shoulder. And then they kind of realize that this whole place doesn't matter, it's all gone. So they just take everything and start knocking it over. They're just going to destroy the s--t out of this place and take it to pieces."

Our visit concludes with the anticipated scene of destruction, which the entire crew is eager to shoot. After all, who hasn't walked past the china section of a Bed Bath & Beyond and had the impulse to bash a plate or two against the wall? During the early takes, Harrelson and Eisenberg are slow to get into the spirit, but after a few practice takes, they start to enjoy themselves. A ceramic plate here, a commemorative figurine there. Soon Wichita and Little Rock join in on the fun, leveling Kemosabe's from the inside out.

The lighthearted scene is indicative of Zombieland's give-and-take relationship between horror and comedy. For the characters, it's also a welcome reprieve from the never-ending war between humans and zombies. After a restful evening and a little tension relief, these survivors will hit the road tomorrow as their adventure continues toward California. All that stands in their way are a few thousand more flesh-eating undead.

9 movie and TV clowns that scared the hell out of us
Inside the Zombieland: Double Tap edit room, sequel secrets (and guts) get spilled

(More to come tomorrow from the Zombieland set, when we talk to Woody Harrelson, Jesse Eisenberg and Emma Stone.)