In a flood of viral marketing that makes us want to set up cyber-dams, the new website for Christopher Nolan's third Batman movie, The Dark Knight Rises, has gone live at TheDarkKnightRises.com.

What kind of viral marketing? If you go to the site, a .wav file will play of people chanting; it sounds like something cooked up for Indiana Jones and the Temple of Doom. If that wasn't hey-let-me-use-my-job's-high-speed-connection-while-the-boss-isn't-looking enough for you, if you run the .wav file through a sound program, the hashtag "#thefirerises" is revealed in the program's display. (NOTE: We tried this here on the shareware program Audacity, and it didn't work.) If you follow Twitter.com/TheFireRises, or use the hashtag "#thefirerises" in a tweet, a little mosaic image of your Twitter picture or avatar gets added to a larger image at http://www.thedarkknightrises.com/image.html . The larger image? It's Tom Hardy as Bane, the super steroid-pumping villain who, in the comic books, broke Batman's spine!

So, what do you think? Does Hardy look cool? Is this a little too viral-y? Is it pushy to hype a movie that's only just started filming?

Via Coming Soon and Collider 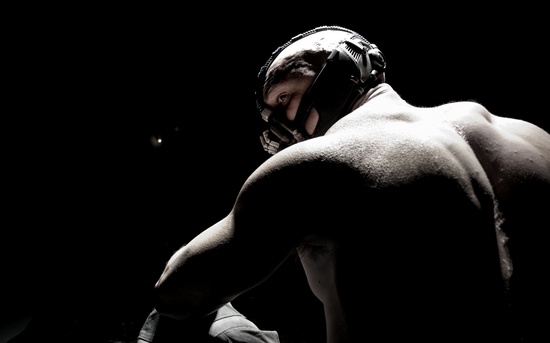