We've got an exclusive sneak peek at one of the characters from Dead of Night, the supernatural action comedy thriller now shooting in New Orleans; you can see a larger version after the jump.

The image shows Taye Diggs as Vargas, the sleek and sinister leader of a family of vampires in the movie, which is based on the top-selling 1986 Italian comic-book series Dylan Dog by Tiziano Sclavi. (Click the image below for a larger version.) 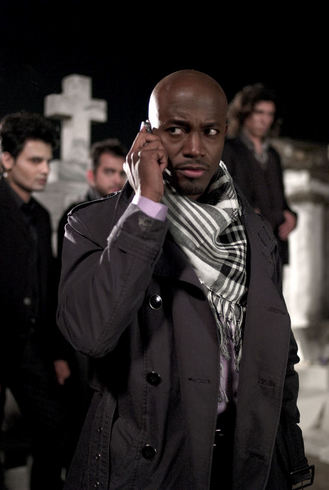 Hyde Park Group and Platinum Studios is producing the vampire/werewolf/zombie movie, which stars Superman Returns' Brandon Routh and Sam Huntington and Journey to the Center of the Earth's Anita Briem.

Routh plays a private investigator who investigates the murder of his friend in a New Orleans populated by undead and supernatural creatures. Kevin Munroe (TMNT) is directing from a screenplay by Joshua Oppenheimer and Thomas Dean Donnelly (Sahara).