SCI FI Wire has obtained exclusive preview images from the upcoming sci-fi action movie Mutant Chronicles, which Magnet Releasing will debut on Ultra Video on Demand on March 27, followed by a theatrical release in select cities on April 24. You can view the rest of the images after the jump.

Ron Perlman (above) is part of the movie's ensemble cast, which also includes Thomas, Devon Aoki and John Malkovich. The film, based on the pen-and-paper role-playing game of the same name, was directed by Simon Hunter and was released in Europe last year. 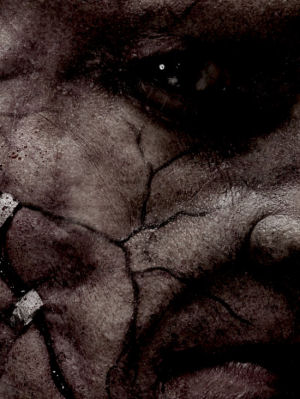 Here's how Magnet describes the movie: Mutant Chronicles is set in the year 2707 on an unrecognizable Earth where a war is raging between four giant corporations who control the planet as they battle over the planet's dwindling resources. This war is soon rendered irrelevant when an errant bomb shatters an ancient buried seal, releasing a horrific mutant army from its prison deep within the Earth. As the mutant scourge threatens human extinction, a squad of ragged soldiers, led by Mitch Hunter (Jane), descends into the Earth in a last-ditch effort to destroy the mutants and save mankind.