Warehouse 13's Eddie McClintock admits he loves horror movies. So what could be more natural than having Syfy's resident artifact hunter take on the Boogeyman? Has the gruesome creature met its match with McClintock?

The actor plays a widowed father of two who is the local sheriff of a town that finds itself with a nasty creature ripping up the local population. Worse yet, the Boogeyman is after his own son. McClintock said his new sheriff character has some differences from the playful and heroic Pete Lattimer he plays on Warehouse 13.

"Officer Samuels doesn't have like a sixth sense, a vibe, like Pete does. He's more serious than Pete. He's a single father. His wife was killed in an automobile accident. We kind of find that out. And he's struggling to deal with that and struggling to deal with being a single dad of two ornery sons," said McClintock during a conference call with journalists.

However, you get the sense that he didn't take the role just because the sheriff is different than Pete. There's a whole other aspect that seems to light his fire.

"I loved Friday the 13th, The Night of the Living Dead, The Hills Have Eyes, Creepshow, you know, Dawn of the Dead," he said.

"On Friday nights when I was growing up in Cleveland there was a show called Big Chuck and Houlihan, and they would show creature features on Friday nights. And it's some of the best memories that I have of growing up is staying up late with my dad and watching these movies," he added.

Regarding his own personal boogeyman, for McClintock it came from the original Friday the 13th, a movie he saw as a kid. "Jason or his mother? She scared me. Because then I was like, 'What? The guy's mom. It's not a monster. It's a person and she's talking to the moon?' That scared me. So I guess that was my Boogeyman."

Even though, "I love movies about half men, half mosquitoes, or [that] just happen to also be part ferret, if I was going to do one of these movies I wanted it to be more of a straight-up, like, horror. And I just thought Boogeyman, this is more of a straight-up-and-down horror film like what I'm used to growing up," said McClintock.

He jumped at the chance to make a scary movie, he said. "I wanted to be able to, again, maybe, possibly give some little kid who loves scary movies a chance to have a good time with his family, his brothers or his dad or whoever."

McClintock said he doesn't know "if kids are taught about the Boogeyman as much these days. Maybe this will reinvigorate the legend of the Boogeyman," he said. 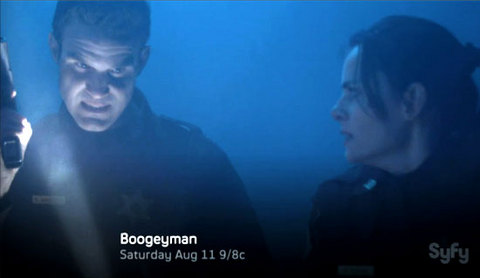 In the urban legend, "it's always the Boogeyman is under your bed. And at one point in the movie the Boogeyman is actually under the bed, so it's kind of a cool call back to the original story. He's a scary guy and he can do some serious damage, but we do our best to kick his butt, as it were," he said.

As a kid, "it was always fun to stay up late. ... I remember staying up with my buddies and telling ghost stories. And this is kind of a modern-day telling of the Boogeyman ghost story with some biblical references in there, which is really cool."

In the script of Boogeyman, McClintock loved "the Cain and Abel tie-in. I think it was a great idea. ... Being a recovering Catholic, anytime you throw in biblical characters into a horror story, it always seems to make it more real and a little more frightening, because we're taught to be so afraid of God and all that stuff."

But will Syfy's Boogeyman scare the bejesus out of a new generation?

McClintock doesn't feel the movie is one that will "just scare you to death." Instead of being heavy on the scares, "it's pretty tongue-in-cheek, really." And in fact, he did some improv that made the film and the trailer. His character says, 'Let's boogie.' That was, again, my little shout out to Sam Raimi and Bruce Campbell, and I wanted to make people smile a little bit during that."

"It is what it's supposed to be, you know? A Saturday night, turn out the lights, and have fun watching a movie. That's all we can ask for," said McClintock.

Here's a preview of Boogeyman: