What the cast thinks about life after Harry Potter

While droves of Harry Potter devotees are positively tingly in anticipation for the July 15 release of Harry Potter and the Half-Blood Prince—the sixth film based on J.K Rowling's beloved book series—there is a sobering fact to remember that tempers some of the euphoria. After eight years of a seemingly endless stream of annual Potter film sequels to count on and look forward to, this film means that there are only two more movies to come ... ever!

"For me, it hadn't [hit me] until this week, as everyone seems to be telling me that it's almost over," Radcliffe said. "I was actually getting along quite nicely until people said, 'Well, your dream is coming to an end,'" he added with a laugh.

Still, Radcliffe, said, "We've got a year a left on seven [the two-part Harry Potter and the Deathly Hallows]. It's a long way to go, and then we've then got to do a lot of publicity, ... so I'm not contemplating the end too much too soon."

Watson added, "Aside from that, I think that we all feel that Harry Potter is never going to die. I think it's so big and so loved. We have the theme park coming out in 2010 [at Universal Studios in Florida]. I think kids will continue reading the books, and new generations of kids will keep watching the films, so I don't feel it will ever really go away. It's got longevity."

For his part, Felton foresaw life after the movies. "I don't think, when they finish filming, that will be the end of us playing the characters," he said. "I think there will always be a little bit of us inside that will always remain. I'm enjoying it rather than looking ahead and getting a bit sad about it. I'm going to make the most of it and certainly cry my eyes out when it's finished." 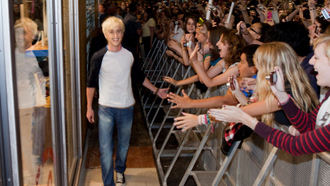 Speaking of which (spoilers ahead!), Felton gets to shed a fair number of tears in Half-Blood Prince as Draco Malfoy struggles to prove his worth as a newly indoctrinated Death Eater. Malfoy is hand-selected by the evil Lord Voldemort to kill Professor Albus Dumbledore (Michael Gambon), but the conflicted young man spends the majority of the film wrestling with the moral ramifications of the dark task.

"This is a great opportunity for myself to really dive a little bit deeper into Draco's head and discover that he really is a coward through and through," Felton said with a laugh. "I was terrified before starting the film about approaching him in a whole new light. He had always been two-dimensional in previous [films], so we had to take a new angle. [Director] David [Yates] was very clear and concise that what he wanted was this ghostlike look, with a glaze in my eyes constantly. We did some rehearsals with Michael [Gambon as Dumbledore] and Alan [Rickman, who plays Snape], which I was s--ting myself massively before doing. But [David] made sure that it was all OK, so any praise I get is down to his great direction."

Radcliffe chimed in with earnest praise for Felton's nuanced performance. "I think for Tom to come in on this film, having not been asked to do a great deal for the last few years, to come in and give the performance you give in the sixth film is remarkable," he said. "It's a fantastic performance."