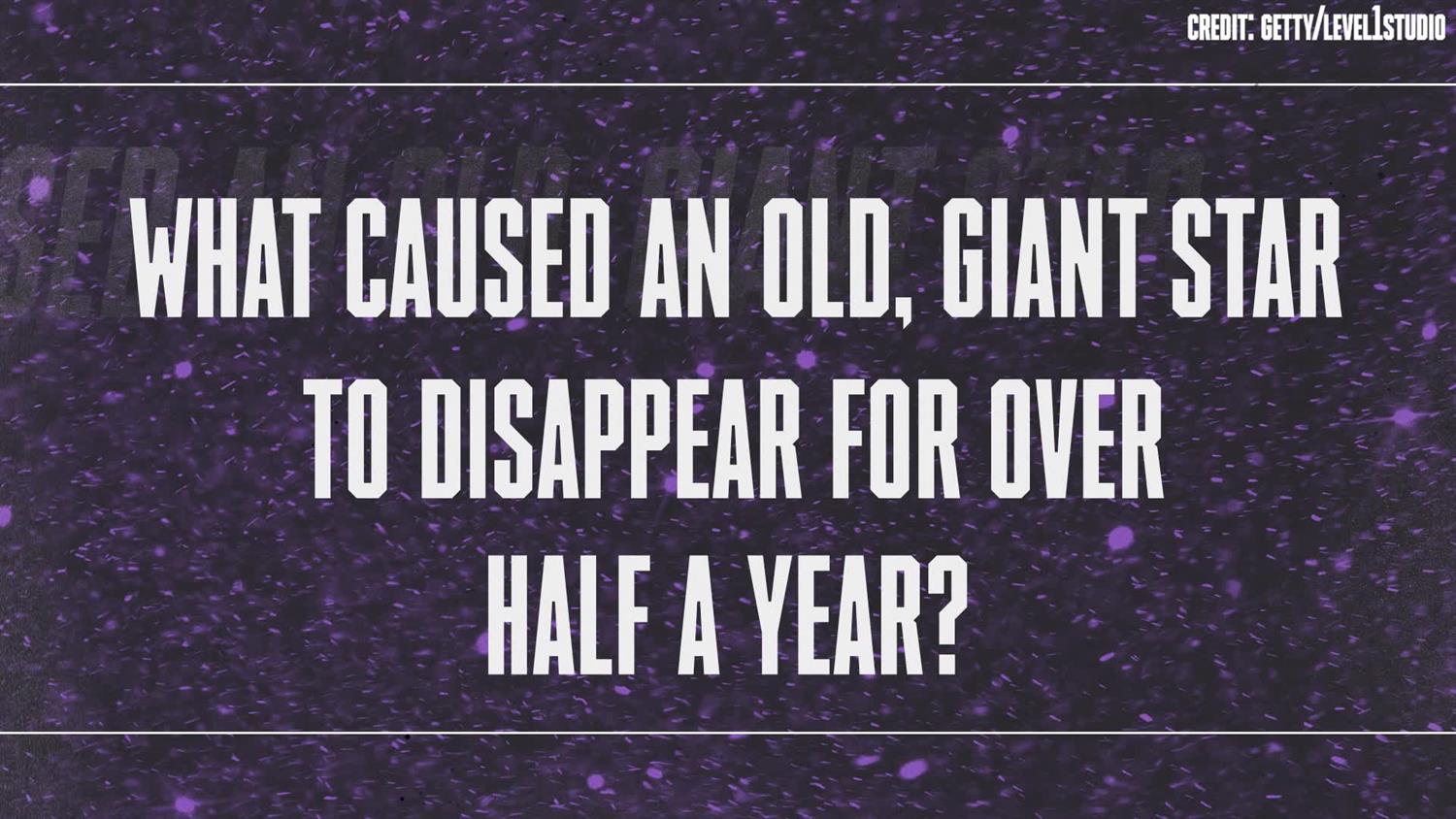 What caused an old, giant star to disappear for over half a year?

In the scheme of galactic magic tricks, one of the more difficult is making an entire star disappear. Especially with the added difficulty of making it reappear again a little over six months later.

Yet this is apparently what happened to a star halfway across the galaxy from us. In 2012, the star slowly faded over a few months, dropping in brightness by an astonishing 97% (that that, Betelgeuse!) before rising again at the same rate it faded. A drop like that is extremely weird, and very difficult to explain.

Forget Yellowstone: Thousands of immense supervolcano eruptions buried much of ancient Mars
The Earth may not be flat but this galaxy sure is

In fact, it's not clear what caused it. Astronomers studying it think they have an idea — a giant disk of dust blocking the star from our view — but it doesn't explain everything. So this trick is still something of a mystery.

The star is called VVV-WIT-08, and that name itself is worth a moment to explain. It was found in a project called the VISTA Variables in Via Lactea — where VISTA stands for the Visible and Infrared Survey Telescope for Astronomy, Variables means stars that change brightness, and Via Lactea is the original Latin term for, literally, Milky Way. This is a survey that looked toward the galactic center, observing hundreds of millions of stars (!!) to measure their brightness over a period of several years.

When you look at that many stars, most will be well behaved and understood, young ones, middle-aged ones like the Sun, dead or dying ones, and so on. But with such a huge number, some are going to act weird. Astronomers kept a list of objects they didn't understand, which they called the "What is this?" list — WIT.

So yup. VVV-WIT-08 is the eighth star on their list. Others included bizarre objects that may be stars that have collided, a distant galaxy that changed in brightness, and more.

The star in this case is a bit strange all by itself. It's clearly a big star, and cooler than the Sun, which means it probably started out life very much like the Sun but is now dying. Stars like that expand hugely and their temperature drops, so we call them red giants. VVV-WIT-08 is probably something like 100 million kilometers across — wide enough that if you replaced the Sun with it, the star would engulf Mercury.

A modern map of the Milky Way Galaxy, showing the Sun below center. Despite being 120,000 light years across, even using relatively modest technology it could be explored in just a few hundred million years. Credit: NASA/JPL-Caltech/R. Hurt (SSC/Caltech)

That's actually a bit smaller than you'd expect for a star like this, which is odd. Also, when they measured how fast it was moving through space, it was hauling gas, moving at nearly 500 kilometers per second. The distance to the star isn't well constrained, but it's likely a part of what's called the bulge, the roughly spherical cloud of stars surrounding the center of the Milky Way. Some stars in the bulge do move that rapidly, but one way of measuring its distance puts it well on the other side of the bulge from us, which in turn means its moving so rapidly it might escape from the galaxy entirely! But that distance measurement relies on knowing what kind of star it is, and if it's not a giant (but, say, on its way to becoming one, what we call a subgiant) then maybe it's closer than that measurement indicates, and indeed part of the bulge.

The point being the star is weird without suddenly dropping to 3% of its normal brightness over the course of a few months.

What could do that?

The obvious idea is that something blocked its light. Some stars do brighten and dim, but not by that huge amount. So this is more likely some external object getting in the way. The astronomers who looked at the data first assumed it was a dust cloud between us and it, but the odds of that happening in this way are extremely small, so they rule that out.

Artwork of VVV-WIT-08, a giant star blocked by a disk of dust surrounding a companion star. Credit: Institute of Astronomy, University of Cambridge
/ Amanda Smith

Their next idea is that there's something orbiting the star itself blocking its light. Looking at the data carefully and running various models to see what works best to explain the observations, what they found is no less astonishing than the star itself: It must have a companion star orbiting it, and surrounding that star is a vast disk of opaque dust, at least as wide as the giant star itself and possibly much larger.

We see this circular disk at an angle, so it looks like an ellipse (like the circular the rim of a drinking glass seen at an angle). The narrow diameter of the ellipse is something like 100 million kilometers, then, and the long axis may be much larger. It's also possible we're seeing it nearly edge-on, in which case it's the thickness of the disk that's the size of the giant star. Either way, it's a big disk.

So what then is the companion star? That's not clear. Middle-aged stars like the Sun can have disks but they tend to be thin; the fact that the disk blocked nearly all the star's light indicates the observed disk is thick and opaque. White dwarfs (dead cinders of stars once like the Sun) can have thick disks, but they're too small to explain what was seen with VVV-WIT-08. Other kinds of stars have similar issues.

Artwork depicting a giant star being blocked from view by a huge disk of dust surrounding a smaller companion star. Credit: NASA/JPL-Caltech

One idea that fits well is that the companion star stripped material from the giant via gravity. This sort of mass transfer is common, and would explain why the giant is smaller than expected. However, given the length of time of the eclipse (200 days) and the fact that is was only seen once and never repeated, the companion star would have to orbit the giant at a decent distance, too far for mass transfer to occur. Maybe they started closer, but as the material moved from one star to the other a lot of the mass was lost to space; this would decrease the stars' mutual gravity, and they'd separate.

So yeah, as you can see, there's no simple explanation here. Everything has lots of steps, weird circumstances, and difficult to overcome obstacles.

Surprisingly, other stars like this are known. Epsilon Aurigae, a star visible in the northeast in winter, also undergoes eclipses by a dust disk surrounding companion stars, though the system details are different. And the astronomers found two more stars (VVV-WIT-10 and 11) that behave in a similar fashion to 08. So it's weird and rare but not necessarily one of a kind.

Astronomy is a peculiar science. We look at a dot in the sky, one of billions, and over time see it change. And from that meager data we get dying stars, binary stars, stars encircled by huge dark disks, stars racing through space at high speeds… and sometimes all of those at once. It's quite the result from such a small effort.