What does this viral video reveal about Pacific Rim's giant robots?

A top-secret memo from Great Britain Air Command has been leaked. They've got a few good men they need to fight against a force unknown to us called the Kaiju. What is the Kaiju, and what are these "mechanical goliaths" the GBAC keeps talking about? Read on to see the top-secret memo for yourself.

Of course, what we're talking about is the first piece of viral marketing for Guillermo del Toro's newest film, Pacific Rim. When you've got a del Toro flick with aliens going toe to toe with people inside giant robots that stars Idris Elba and Ron Perlman, you better be sure to put something exciting out into the world that's worth such a talented team.

With that in mind, we've got this memo that raises more questions than it answers. And isn't that exactly what viral marketing is all about? Take a look: 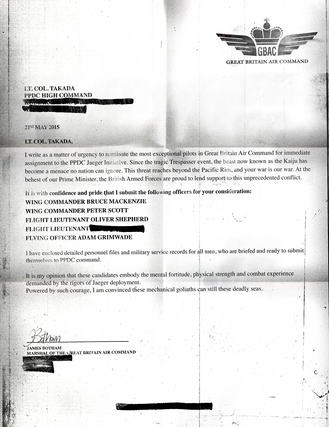 The most important question, naturally, is whose name is crossed off and why. We understand the need to vet someone who is going to protect the known universe from an alien menace, but damn it, we need at least one cocky bastard X factor who'll come through in a clutch!

All that, plus an emergency broadcast video. But what's the emergency?