What a grown-up Alice discovers in a new Wonderland

Tim Burton's upcoming Alice in Wonderland adaptation isn't really another movie version of Lewis Carroll's beloved books Alice's Adventures in Wonderland and Through the Looking-Glass and What Alice Found There.

If you've read the original books and seen all the movie adaptations, the new film won't repeat the same old stories. If you've never visited Wonderland before, the film will fill you in and catch you up.

As the grown-up Alice, Mia Wasikowska had more to portray than just a child's amazed reaction to surreal characters. "At this time in the story, at this time in her life that a lot of people experience something that she's going through," Wasikowska said in a news conference last weekend in Hollywood. "Just discomfort in your skin and in who you are. She just sort of has this awkwardness about her I think a lot of people really go through in their life. That was something that I understood. Then, ultimately, her story is her kind of coming back to when she's just a young girl, she was very excited, very sure of what she was doing."

Linda Woolverton wrote a screenplay about Alice as a 19-year-old woman. Alice convinced herself that her childhood memories of Wonderland were just dreams. Faced with the same characters and creatures as a grownup, Alice has a new perspective.

"I liked what Linda did with the script," Burton said. "She almost treated this story like how the Alice material has affected us, at least for me."

When Alice follows the White Rabbit down the rabbit hole this time, she finds Wonderland in a shambles under the Red Queen' (Helena Bonham-Carter) tyrannical reign. The Mad Hatter is still mad, the White Rabbit is still nervous, and the Cheshire Cat is still sly, but they need Alice to end the queen's reign by slaying the Jabberwock. 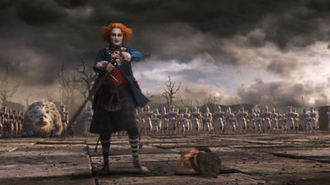 "It's a story about somebody using this kind of imagery and this kind of world to figure out problems in their own life," Burton continued. "What's fantasy and reality and dreams and reality, how they are not separate things, that they're one thing. It's how we use those things to deal with our issues in life."

Alice still encounters some familiar elements. She drinks a potion to shrink and eats a cake to grow to gigantic sizes. The Mad Hatter is still having a tea party, and the Red Queen still likes to decapitate people. Other familiar stories would not have fit into the new narrative.

For example, the White Rabbit had his famous catch phrase, "I'm late, I'm late for a very important date." As the voice of the film's White Rabbit, Michael Sheen did not get to say this line in the new story. 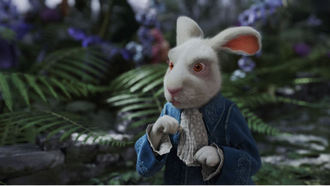 "There is nothing I'm late for," Sheen explained in an exclusive interview later that day. "This isn't the Alice in Wonderland story. This is a different story, so everything is very familiar, the same characters, the same locations and stuff, but it's not the same story, so there was no reason to say it."