Now that Bryan Singer is developing a new/retro movie version of Battlestar Galactica, the real question is: What will everything look like?

Concept artist Eric Chu, writing in CinemaSpy, has come up with some cool designs that hearken back to those of the 1978 TV series, with a few tweaks to update them. And look! A Daggett!

20 gay characters we love from sci-fi movies and TV
Important Toy News: Heroes, horror, and Battlestar Galactica are the hottest in collectibles this week

Chu's not just anybody: In 2003 he served as production illustrator for Syfy's Battlestar Galactica, redesigning Galactica, the new Cylon Centurions and the Cylon Raiders and Basestar. 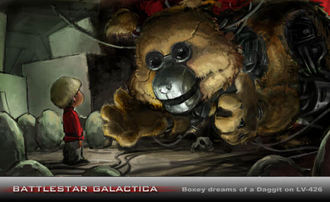 Whether Larson and Singer are planning a remake or a continuation, there is no doubt that the feature will draw very closely from the Battlestar Galactica so many of us grew up with. Design-wise, this presents a unique challenge (as I found out from my first attempt at updating a beloved property in Drawing on Imagination: 'UFO--The Movie' Concept Art): How does one maintain the look and feel of the original without being beholden to it? A few cosmetic changes here and there might be fine for some, but insufficient for those who are accustomed to the kind of sophistication that digital technology now affords us.