What Fanboys helmer Kyle Newman has to say about Darth Weinstein

Newman also remains surprisingly diplomatic about the Weinstein Co.'s attempts to cut and reshoot the movie to remove what producers perceived as a depressing subplot, generating howls of protest from fans who had seen early footage. (The fans even mounted a Stop Darth Weinstein campaign in support of the movie.)

The comedy-drama centers on a group of friends—played by Dan Fogler, Chris Marquette, Sam Huntington, Jay Baruchel and Kristen Bell—who decide to road-trip it out to the Bay Area, and specifically Skywalker Ranch, when one of their own falls ill with cancer. Why Skywalker Ranch? Because it's 1998, they're all Star Wars fanatics, and the guy who's dying probably won't survive long enough to see Star Wars: Episode I—The Phantom Menace, so they're on the way to crash the ranch and check out a work-in-progress print.

The movie was completed years ago, but when the powers-that-be at Weinstein Co. saw Newman's initial cut, producers decided changes were needed: They wanted to jettison the cancer angle. At one point, another director—Steven Brill of Drillbit Taylor and Little Nicky—was recruited to shoot new scenes. Release dates came and went. The Star Wars fan base let it be known that they wanted to see Newman's version, and that version, which actually does encompass bits filmed by Brill (though edited in by Newman), is what the faithful will see on Feb. 6.

Now, Newman can afford to be magnanimous about the efforts. "On their end, they're just trying to take a movie that has a fan base and has a following and tap into it on a wider level," he said. "They were saying, 'Maybe if we try this it will make it bigger and broader and more successful.' It wasn't necessarily the best step, and I think they discovered that, but ultimately it was within their rights to go and do that."

How long ago did you actually start work on Fanboys?

Newman: Hmm, it's got to be five and a half years ago, late '03. It might even have been before that.

In your view, what's the heart of the story?

Newman: It's about friendship. It's about these best friends. They have this shared childhood history in their love for Star Wars. That's their commonality, the thread, and it's almost the language they speak with each other. It's also about accepting that you can grow up without having to give up what makes you you. It's OK to still embrace the things that you love, that just because it's not necessarily common or accepted, you don't have to leave it behind.

We tried to create characters that are very real and balanced people. They're people you'd want to hang out with. They're not losers. They're not tragically flawed people. They just happen to love Star Wars, and when they get together that's what they talk about. So it's a movie about this bond between these ordinary guys who have this thing in common, and the distance they'll go to help a friend in need.

Be honest: Did you put the Kristen Bell character into Fanboys in order to appeal to the guys out there or to help attract women to the movie?

Newman: You know what? It was really the personality we wanted for the movie. I don't think all Star Wars fans are guys. I've been to a lot of different conventions—Star Wars conventions, SF conventions, comic-book conventions—and there's a huge community of females that are into this, too, and they don't get due credit. So that's one of the things we talked about when I got involved, and we added the female character. There's that separation. She's one of the guys, but is she one of the guys? She still gets looked at sexually, but also platonically.

Kristen was just pure personality. She's smart, she's sassy, she's honestly into a lot of this stuff. So it wasn't a stretch. She has a geek side. It just seemed like the perfect thing, and Kristen was one of the first people I targeted to be in the film. It took all the way through to the end of the casting process to finally lock her in because of the difficulties with her schedule and her show [Veronica Mars] at the time. It worked out, luckily, because we really envisioned it as her very early on. 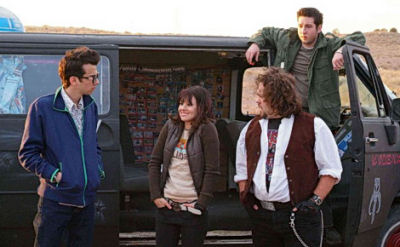 You ended up with some really great cameos. How surprised were you that people like William Shatner, Carrie Fisher, Billy Dee Williams, etc., agreed to appear in the movie?

Newman: We were always hopeful, but I was so pleased. We were pinching ourselves. I think it was a testament to the script and the team, the creative team we'd assembled. We had Kevin Spacey involved to help us produce. Once we started getting these actors, others wanted to be in it, too. People like Billy Dee and Carrie read the script and saw there was a lot of heart to it.

When it seemed like the film was going to be released in an overhauled version, the Star Wars fan base really came out fighting on behalf of your version. How satisfying was that?

Newman: I was impressed. It was hard for me. I didn't want negative press for this movie. I didn't like seeing all that stuff going back and forth online, but I was satisfied with the end result. And it's maybe given us a little bit more awareness and attention. But it was hard. I'm confident and I'm proud of the movie we made, but you were hearing a lot of speculation, and it's like, "Oh, there must be a problem with it."

Honestly, on their end, they're just trying to take a movie that has a fan base and has a following and tap into it on a wider level. They were saying, "Maybe if we try this it will make it bigger and broader and more successful." It wasn't necessarily the best step, and I think they discovered that, but ultimately it was within their rights to go and do that. They own it. We were adamant, but you can't overstep your bounds as a filmmaker. It might be a different world if I were a studio head. It'd be my right to say, "Well, I'm spending the money. How can I make this the most successful and best thing?" It wasn't done with an intentional disrespect to the community. It was just trying to make it bigger and better.

It was frustrating, but it was never disrespect. We all wanted the same end goal, which is a successful movie about Star Wars fans. There was, obviously, deliberation about what makes the best movie about that. We found the best storyline originally, and we settled back on that in the end.

This finished release version of the film contains some additional footage shot by Brill and edited in by you. What will we see on the DVD? This version? Your version without Brill's footage? The version that the Weinstein Co. considered releasing? All of them?

How Fanboys appeased George Lucas and poked fun at Phantom Menace
We uncover whether the Fanboys really are, you know, fanboys

Newman: All I know, ... we and the actors went in and did a commentary for our version. The only version we ever really fully sound-designed to completion was this version. So that's the complete version. I've looked at what the list of things are for the DVD, and it's a lot of deleted scenes and a lot of behind-the-scenes stuff that's thoroughly entertaining and fun. I don't know if there's going to be, definitely, the other version. I know there was a mention of that at some point, but I think that's in the past for everybody.