It seems like, lately, the cast of Star Trek: The Next Generation has really been making the rounds on the convention scene. That affords ample opportunity for completely ridiculous fan interactions. Which brings us to a con staple—the public wedding proposal.

The setup is simple—pretty much the whole darn Next Gen cast (Patrick Stewart, Brent Spiner, LeVar Burton, Jonathan Frakes, Marina Sirtis, Gates McFadden, Michael Dorn and Wil Wheaton) are taking photos with fans at a con. One couple comes in and things take a turn for the AMAZING.

Bless Wil Wheaton, for he has given the full scoop. Here's what happened next:

"The girl went to stand between Patrick and Frakes, and the guy directed her to stand in the front, instead. All of us tried to figure out what was going on (usually it's small kids who come to the front, usually sitting on Brent's lap or Gates' lap), and the guy said, "I really love Star Trek, but I love [her name] even more." He got down on one knee, and proposed to her.

Marina started to cry, I felt like I was going to cry, and we all applauded and celebrated when she said "yes." Apparently, they'd met Marina earlier in the day, and Marina had given him shit for not marrying her, so Marina was embarrassed about that."

One reditter went on to say that "if the cast of Star Trek tells you to engage, you make it so."

We couldn't agree more. To the happy couple! 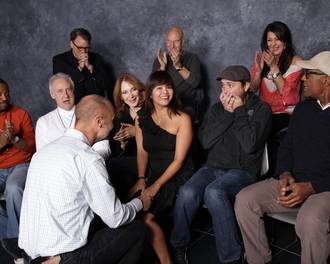