What Ford told Favreau about the title to Cowboys & Aliens

Guillermo del Toro admits that his job involves a lot of strange things in the name of "research." And one of them involved touring Disney's Haunted Mansion attraction ... on foot.

At his Thursday-evening joint Comic-Con interview with fellow filmmaker Jon Favreau (Iron Man), Del Toro explained that as part of his research for the new Haunted Mansion movie he's writing and producing for Disney, he went to the decades-old, world-famous attraction at Disneyland and spent three hours examining every inch of it on foot.

A thorough examination of The Shape of Water's sex scene and Fish Man anatomy
Guillermo del Toro's Pinocchio 'as far as you can get' from Disney version, says one of film's writers

Riding through the mansion on one of its automated carts was not enough for the exuberant director, who revealed, "I hid a quarter and a dime in that ride that nobody will ever find!" 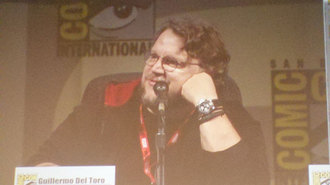 Del Toro also said he got a chance to look at the original Disney plans for the ride, joking, "I wish I had shown up to that with a very large raincoat."

The big man spoke a little about that and other projects, saying that the Haunted Mansion script is in its third draft and that he hopes to make it a "fun, scary movie," while his production of Pinocchio is designed and budgeted but just needs financing.

As for his next project, the epic Pacific Rim, Del Toro said he envisions it as a tribute to the great Japanese kaiju films and that he is designing "gigantic @#$!-ing monsters" for the movie.

Favreau agreed, saying he went to Del Toro's house to look at some of the designs and called them "mindblowing," adding that they "pay homage to the history of big monster movies with a twist that could only come from Guillermo."

For his part, Favreau spoke about the inspiration of people like Walt Disney in his life (he's working for the Disney studio too now, on a film based on the Magic Kingdom park itself) and his approach to making a "high-concept" films like Cowboys & Aliens.

He recalled that at one point there was a lot of discussion about whether the title would appeal to audiences and whether everyone involved felt comfortable keeping it. When he finally asked star Harrison Ford about the title, the gruff legend said, "Well, what the hell else are you gonna call it?"

Both men spoke about their passion for filmmaking, and especially for big, imagination-based projects like Iron Man and Pacific Rim, with Favreau saying that he often turns to Del Toro for advice and summing up both their careers by saying, "We both aspire to be innovators."

Two great filmmakers on one panel -- only at Comic-Con!