What is Roger Rees doing in Warehouse 13?

Syfy's Warehouse 13 has been loading up on cool guest stars, and the latest to appear on the popular original series is Tony Award winner Roger Rees, who makes the first of three appearances in "Implosion," premiering tonight at 9 p.m. ET/PT. (Spoilers ahead!)

"I play James MacPherson, a friend of Artie's [Saul Rubinek] from a long time ago, when they were very engaged together very closely in the research and development of the idea that he perpetrates," Rees (The Scorpion King, The Prestige and The Invasion) said last week in an exclusive telephone interview. "Then they sort of bisected and split, and I think one way and Artie thinks another. For a long time everyone thought that I was dead, and we also share a history about a girlfriend [Lynne Cormack]. So there are many reasons why my turning up in the middle of this number of episodes is really a bit of a fly in the ointment." 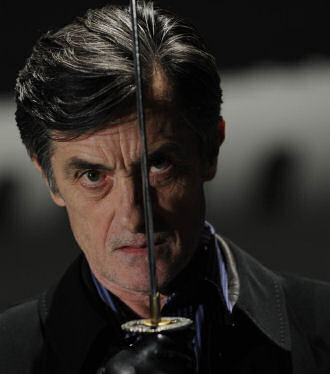 Rees said that he enjoyed shooting with the Warehouse 13 crew in Toronto, calling them "expert" at what they do. And he called Rubinek, with whom he shares many of his scenes, a "wonderful" actor. "He's actually a great stage actor," Rees said. "I don't know if people know that, because he does so much film and television. But I think Saul really grounds the whole thing together and makes Artie somebody really, really human. Also, I knew the show runner, Jack Kenny, before. We'd done a pilot together many, many years ago. He, too, is a very clever and wise man. So I think the show is in good hands."

Rees will turn up again as MacPherson in episode 11, "Nevermore," airing on Sept. 15, and then in the season finale, "MacPherson," a cliffhanger set to premiere on Sept. 22. The actor doesn't know yet if he'll return for more next year, but he sounded open to the possibility.

"I just do what I'm asked, really," Rees said. "I don't know if I'll be doing more. It would be very nice to think that it goes on, because it's a very interesting conundrum. It's sort of like a riddle, the show. It's a very intriguing series, and it's got much to recommend it from a literary, scientific and also a human and emotional level. But I don't know yet if I'll be doing more."