What Lost's 'Jacob' really knows (hint: you may know more)

Oh, how we'd waited for Jacob, and the writers and producers of ABC's Lost kept us guessing. Was Jacob—the mystical figure who guided the Others—even real? Was he invisible? Was he a figment of Ben's imagination, or was he God?

Apparently, sometime last season, the producers decided Jacob was, in fact, Mark Pellegrino, a seasoned actor with a long resume (everything from the film Capote to a recurring role on Dexter) who had often been tagged playing bad guys.

For a guy used to playing bad guys, Pellegrino's been surprised about all the attention he's gotten from playing Jacob. "I wasn't expecting this huge outpouring of fan love and affection that I've been getting," Pellegrino said in an exclusive interview. "So far it's been a very interesting and fun experience, because, especially with Jacob, people just love Jacob."

That is quite a surprise, especially considering that his character is officially dead on the show. We met Jacob in last season's "The Incident, Part 1," sitting on the beach and verbally sparring with the Man in Black (Titus Welliver) far, far in the past, which left us with plenty of questions. It seemed that we'd just met Pellegrino's Jacob when he was stabbed by Ben (Michael Emerson) in 1977 2007 in "The Incident, Part 2" and then kicked by Fake Locke (Terry O'Quinn) into the fire, leaving us wondering ... WTF?

"That's so brilliant," said Pellegrino. "I think it's amazing writing, because you just ... yeah, it's great. It's pretty clever to have all this buildup and then to see him go down so quickly, this iconic figure, and then you're just left puzzling for another couple of months before the next episode comes up. What is gonna happen now? Oh, my God!"

While dying on Lost doesn't mean you're gone from the show, Pellegrino didn't know where things were headed. "I knew there was a possibly of a recurring, but I didn't want to go any further than thinking that that might be it. I actually just kind of take it from day to day and just count my blessings for that day," he said.

He's not the first actor to express that working on Lost doesn't exactly come with job security. "That's true, and if something happens to you, it may not be the end. So it's definitely not that linear kind of story," said Pellegrino.

Although Pellegrino's actually appeared in only a handful of episodes so far, it seems like dead Jacob is in almost every episode. "It's because my presence is always there, and they're always talking about me, and I'm always behind the scenes doing something, whether you see me or not," he said. "So it does feel like I've been there more than ... how many have I been in, five? I think I've been in a little bit more, haven't I?" 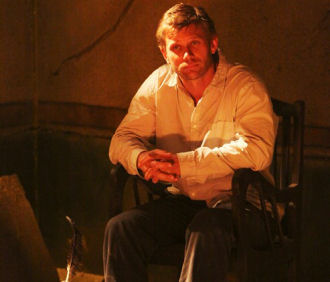 While Pellegrino sees Jacob as an "innocent" and about "the human element" in many ways, the writers have gone out of their way to make sure that we, the audience, don't really know whether Jacob is a force for good or evil. It's quite different from his recurring role as Lucifer on The CW's Supernatural this season.

"And that's what I love about it," he said. "When you don't know so distinctly who is good and bad and when both sides have elements that you can root for ... it's a very powerful, I think, literary device."

Pellegrino admits that as the actor playing Jacob, he wouldn't have minded a bit more information about what was actually going on when it came to the mysterious character. "The biggest challenge is not knowing the end, or at least at the time, not knowing all of the elements, and kind of having to instrument-panel my way through things and knowing that it will all work out fine because I'm being guided," he said. "But I'm kind of flying blind in a way, because I may not know the significance of this moment or this gesture or this thing that's going on. I might not know it fully. I can guess and draw some conclusions, but that is a challenge, because I'm used to knowing the end, and I'm used to letting the end inform the rest of the moments in the piece. So that's kind of the challenge there. It's also a challenge not to be able to say anything about the project because it's so ... it's such an intensely guarded secret."

The one thing we do know about Jacob and Pellegrino is that his job will be done in one way or another when Lost finally comes to an end in May. "That's right. It's safe to assume that," he said.