What Peter Jackson plans for the two Hobbit movies and why

Today producer/director Peter Jackson talks about The Hobbit films, updates us on their status, debunks a few rumors and talks about what the two movies will actually encompass and why.

Among the highlights: The script for the first film is about three weeks away; no casting has been decided; the two movies will encompass the story in the book and won't be one movie about the book and a second to bridge the period between The Hobbit and The Fellowship of the Ring, as has been speculated; and the films will draw in narratives from the same era as told in other writings.

This is part two of our group interview with Jackson from Comic-Con in San Diego last week; part one, about The Lovely Bones, posted yesterday, and part three, about his upcoming sci-fi action movie District 9, posts tomorrow.

Jackson first talked about his decision to hire Guillermo del Toro to direct the two movies, based on J.R.R. Tolkien's fantasy book and precursor to The Lord of the Rings.

"Guillermo's there not because I'm a mentor of him, but I just thought he would do a terrific job with that film," Jackson said. "It wasn't the type of movie I [wanted] to give to a young, novice filmmaker and have them sort of godfather it through. I wanted someone who ... was established, who I could trust with it. ... With The Hobbit, I really don't want to ... be too involved in looking over the shoulder of the director."

Jackson added that he chose not to direct the films himself for a specific reason: "So I didn't have to compete against myself," he said. "Because with the Lord of the Rings movies I did make, those were the very best films that I could make, given the circumstances and everything else. ... I poured my heart and soul into those films, and I just thought that I'd given everything I could to The Lord of the Rings, and now, with The Hobbit, I'd have to go there again, and now I'd be competing against myself. And how did I shoot Hobbiton the first time around? And how did I shoot Gandalf coming through the door? Now I'd have to look back at what I did the first time and do something different. Or not. And suddenly I could just imagine myself having this rather weird year or two where I was relating to my own work in a way in which I didn't feel comfortable. So I thought that the best thing—and honestly the best thing for the project and the fans of Tolkien and everything else—was to find another filmmaker who would do a really great job, and let them shoot Gandalf coming in the door, and let's all enjoy what they do with it and give somebody else a chance to do something fresh and original with it."

Following is an edited version of our conversation about The Hobbit, which is in preproduction in New Zealand.

Can you update us on the status of The Hobbit?

Jackson: ... We're about three weeks, I would say—give or take a little tailwind—about three weeks from turning over the first script for the first Hobbit movie to the studio. The process that we've been through so far is we wrote—and when I say "we," it's the four of us, it's Guillermo, Philippa, Fran and myself—we wrote an extensive treatment of the two films, which we pitched to the studio on a long conference call, and that was, I guess, about three or four months ago. And that was good, that went well, and they liked the idea. Because no one was really [in disagreement about] "Should it be one film? Should it be two films?" 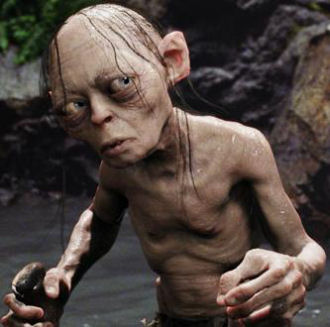 There was talk about doing The Hobbit as one movie and doing an in-between-The Hobbit-and-The Lord of the Rings [movie], a bridge movie. ... We worked through the storyline, and we thought, "Well, obviously, we could squeeze The Hobbit into one movie," but even, like, a three-hour movie, you'd be amazed at how much of that story you'd have to lose. It's weird. I mean, the book ... is what the book is, and we just worked through a process of including all the events that we'd like to see in a film, and it was clear [that] it wasn't going to fit. Plus, the fact that we want to embellish a few things and put a little bit of extra ... narrative in for Gandalf and what he's doing in Dol Guldur and the Necromancer and various sort of side ... stories that are happening. And so we decided really that the two movies we were doing should be The Hobbit part one and part two.

So we devised this treatment, we pitched it to the studio, and they were happy with it. So then we set about, about three months ago we started in earnest to write the screenplay, which we're now about three weeks from delivering the first film.

And we haven't done any casting yet. I mean, that's the truth. There's all these rumors about people, but we haven't offered a single role to any actor yet, because everything's a process, and we haven't got a green light, and we haven't got a budget. And when you make an offer to an actor, one of the things that you have to obviously expect is they're going to ask to see a script, so we have to wait until we have a script. The other thing that you also need when you offer the role to an actor is you need dates. You need to be able to tell them when you want to start work and when they're going to finish work and how long they're going to work for. Because, obviously, an actor's deal is very much tied to the commitment of work. And so it's not until we deliver the script that we can break the script down, that we can get a budget, and then once we've got a budget we have to get a green light, which we haven't got.

I mean, we've been talking about releasing the first movie in December '11 and the second in December '12, and that's what we're aiming for. But we've only ever been aiming for it, and the studio obviously are not going to sign off on the films until they see a script and the budgets that are budgeting to that script.

So we're three weeks away from the first movie, the first script going in, and we haven't started working on the second script yet. We're just doing one at a time. But we'll start work with that as soon as we're done with the first script. And as soon as we do the first script, there'll be a breakdown of that done. We'll work out the needs of the cast. We'll do some extrapolating. We're not going to wait for the second script before we do a budget, so we'll use the first script, and we'll kind of do a guesstimate based on that how much we think the two films are going to cost. We'll be able to block out the actors' times that we think we're going to need. When we're going to start, when we're going to finish. What the duration of the [shoot is]. And then at that point we can actually go and talk to their agents and offer them a role. So there really isn't any casting news that I can report, and that's the reason why.

Have you talked about casting among yourselves? Are there people in mind that you can think of?

Jackson: ... There are some, yeah, which I wouldn't [want to say]. Obviously, there, ... the thing that we want to do is, any characters that were seen in The Lord of the Rings, we obviously want the actors that originated the characters to come back and play them again. So that obviously goes without saying.

And in terms of new characters, in some regards we are talking about people as ideas, but ... obviously it would be wrong of me to talk about that here, because we should talk to the actors themselves first before we talk about it over the 'net.

And in other ways we're waiting until we finish the script, because ... a key bit of casting are the dwarves, and the dwarves are ... important characters in the sense that they're a variety of personalities. And we're developing up those personalities as we write the script. And it's very fluid, and we don't ... even want to start thinking about who would play those roles of the dwarves until we really nail the scripts. Because, you know, is this Happy or Sleepy or Dopey or Grumpy or Doc? We need to know who's who. ... We need to know the personality of the particular character and what their function in the story is before we really can figure out what actor would be suitable for that role. So ... we're not really thinking too much about that at the moment.