What secrets does True Blood's 1,000-year-old vampire reveal this season?

"Season one was an introduction to Eric," Skarsgard said in an exclusive phone interview last week. "You didn't see much more than the one side, which is him being the bad-ass vampire leader. In season two we go deeper, and you'll understand that he is more complex than that and has a sensitive side and a very loyal side. He can be a great friend. He doesn't like a lot of people, but if he likes you, then he's extremely loyal. For an actor, it's something I love to do, to go deeper and play more. I felt that after season one, people were always like, 'Eric is the evil vampire,' and I always defended Eric, because I don't see him as evil at all."

Overall, True Blood is based on Charlaine Harris' Southern Vampire novels, and in particular this sophomore season loosely follows the plot of the book Living Dead in Dallas. Both have Eric, as the vampire sheriff of Area 5 [i.e. the Deep South], charging telepath waitress Sookie Stackhouse (Anna Paquin) and her vampire lover, Bill Compton (Stephen Moyer), to travel to Dallas, where she can use her powers to seek out the whereabouts of a dangerous vampire named Godric. Only it turns out that their harmless field trip exposes them to some potent evil that ignites a complicated triangle among the three that will unfold over the season (and more if HBO continues to pick up the show).

The following is an edited version of our interview with Skarsgard, in which he talks about what fans can expect from Eric's arc. True Blood's second season is now airing Sundays nights on HBO at 9 p.m. ET/PT. (Possible spoilers ahead!)

Did you find it helpful to read Charlaine's novels to build a backstory for Eric, or did show runner Alan Ball discourage that, since the show isn't a literal adaptation?

Skarsgard: No. Before we started season one, I read the first five books just to give me some backstory and to help me dive into the world and understand the world that Charlaine created and my character of Eric. But once we started shooting season one, it was a little confusing reading the books and the scripts at the same time, because they are a little bit different. Actually, it was quite confusing to try and figure out what was from the books and the series. But it was great to have them as a backstory in creating the character.

Has Alan given you a lot of notes and direction for how he wants you to interpret Eric?

Skarsgard: Alan has given me a tremendous amount of freedom, and he really lets us go and explore our characters. It's given me a lot of confidence and energy and enthusiasm as an actor to have that from a show runner.

There's a sort of hilarious too-cool-to-exist vanity about Eric, with his foil highlights in the season premiere and his casual track suits. Do you invest a lot of your own time in creating Eric's look?

Skarsgard: Yes, it's a collaboration I have with Audrey Fisher, the costume designer. She's amazing. We have a fantastic relationship. We have fittings every week where we get together and talk to bounce around ideas. It's something we play around with and come up with together.

Anything you are particularly proud of in Eric's repertoire?

Skarsgard: The stuff I wear on the show is always stuff that I'm happy with, because I pick it with Audrey. But in season one, it was my idea to come out in sweatpants and flip-flops. I thought it would be kind of a weird and disturbing image to see a vampire guy kill and rip a guy apart in flip-flops.

Kristin Bauer (from left) as Pam, Alexander Skarsgard as Eric and Patrick Gallagher as Chow (click for a larger version)

Eric speaks fluent Swedish, which is your native tongue and country. How did that come to be his private conversation language with his right-hand woman, Pam?

Skarsgard: We talked about it before we started season one, because we really wanted to establish that he was a very old vampire. We talked about him having a stronger, European accent at first. But I felt that he's a thousand years old, so he's probably fluent in different languages. My thought was that it was more interesting if he speaks English but he also flips into Swedish here and there and maybe some other languages too. But it's been tough for Kristin Bauer, who plays Pam, because she doesn't speak a word of Swedish. I work with her before we shoot the scene just to make sure that she gets it. [Chuckles.]

It's become a great power trip for Eric to keep others in the dark and on their guard.

Skarsgard: It also establishes Pam and Eric's relationship and that they have something in common. I think it's interesting and something we can play around with a lot when we are in a room with a lot of people, so I can say something in Swedish that only Pam will understand. There will be more of that in season two. We actually have a couple of scenes coming up that are all in Swedish.

In season two you've been able to create a balance of the sinister married with the sardonic for Eric. It helps distinguish him from Bill as two sides of the vampiric coin. How does Eric see Bill?

Skarsgard: Compared to Bill, I think Eric is so old. He's been around for a thousand years, so he kind of sees Bill as this naive little kid. He's not even two hundred years old. I think he sees him as kind of pathetic sometimes. In a way, Eric's jaded, because he's been around for a long time. It's hard to impress a guy like him, and it's hard to intrigue a guy like him. So there lies the attraction to Sookie, because he picks up on something that he doesn't really understand [about her]. He's doesn't know what that is, and it intrigues him. 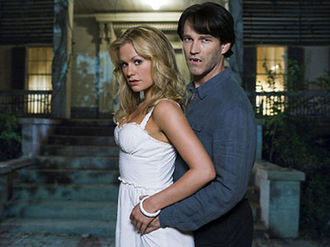 Speaking of Sookie, readers of the books know that Sookie and Eric become involved as the series continues. Is Alan taking a similar path with the characters?

Skarsgard: Without revealing too much of what's going to happen, you can definitely say that Eric is intrigued by Sookie. Especially in the beginning, he used her and her ability to read minds. But as the story will progress, his interest becomes more personal, and of course it creates drama and conflict, because Bill is very territorial.

Considering he's a millennium old, do you see Eric as an old-school or progressive vampire?

Skarsgard: Eric is definitely progressive, and he adapts. I mean, vampires came out of the coffin three years [ago], and he's already an entrepreneur. He's running Fangtasia and making tons of money with merchandising. He's not going to hide in a cave somewhere in Transylvania.

Last season we got flashbacks of Bill's pre-vampire life. Will we get the same for Eric this year?

Skarsgard: Yeah. We'll definitely see moments of Eric's past where you will understand more of where he came from.

What's been the highlight of season two for you?

Skarsgard: I think the entire season now has been so much fun. But we shot two scenes in episode five ["Hard-Hearted Hannah"] in Swedish with other Swedish actors, and I had a lot of fun shooting those scenes.

With season two wrapping shortly, do you have plans for new projects over the summer?

Skarsgard: Hopefully I'm going to do a movie in August, and then I'm going back to Sweden to finish a movie that I started there last year.

Skarsgard: Soon. We're working on the details for the contract, so it will be announced in a few days.