What Seeker's Regan hopes for season two. Hint: It flies and breathes fire

Tag: Legend of the Seeker

Legend of the Seeker, the first-run syndicated TV series based on Terry Goodkind's Wizard's First Rule, will return for a second season, and no one's happier about that than the fantasy show's lovely leading lady, Bridget Regan.

For Regan, it means another year of playing the powerful and mysterious Kahlan, working in the employ of executive producers Sam Raimi and Rob Tapert, and sharing scenes with Craig Horner, who plays the handsome and heroic Seeker, Richard.

More Legend of the Seeker

Star Trek's sexiest Vulcan will be back on TV soon
Seeker's sexy season 2 with 'T'Pol' and 'Cordelia'!

SCI FI Wire spoke to Regan by telephone from New Zealand during a day off from shooting Seeker —a day off that came less than a week after news broke of the show's renewal. Following are edited excerpts of the exclusive conversation.

Congratulations on the show's renewal. Was it a surprise to the cast and crew? Expected?

Regan: Thank you. We're thrilled. It's what you work for. Everyone from the crew to wardrobe and makeup and the cast and the creative team puts in 110 percent. We're working really long hours, and it's every day. You get up in the dark and you go, and everyone keeps putting out such high-quality work in every department. I'm not surprised at all. I think there are plenty more stories to be told and a lot more things to explore about our characters. We keep trying different tones, which I like. We're starting a new episode and it's frigging hilarious, the script, and we haven't explored that yet.

I feel so lucky that the writers and the directors keep exploring these different styles, that it's not the same thing each week. I'm getting to play a different character that's inhabiting Kahlan's body. That's such a great challenge. A few episodes ago I got to play a Mord'Sith. I did not expect that to happen. So I think they're doing everything they can and really using the material well and wringing the best out of the actors and the crew.

What do you want to see for Kahlan next season? What have you tasted that you want more of? What's not clicking that you'd like to see improved?

Regan: I love the relationships that have developed, like with Kahlan and Zedd [Bruce Spence]. They have such mutual respect for each other, and I love working with Bruce. He's literally one of the nicest, coolest, funniest men you could ever know, and I hope that we get to explore that relationship more, because in the mythology of the books the Confessor and the Wizard have a long-standing relationship. When I get to do scenes with Bruce, it's such a treat. So I hope that we explore that more. 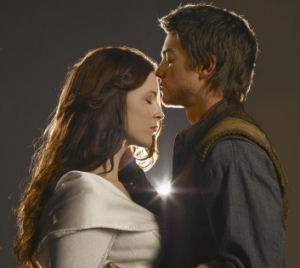 At the end of Wizard's First Rule, Kahlan and Richard get together and ride off on a dragon. I keep asking, "Are we going to get a dragon? Is there going to be a dragon in the last episode? I really want a dragon." I don't know if that's going to happen. I don't know if we're going to get together or not. If we don't, I don't know how long we could hold out on getting them together. I think there are 12 or 13 books in the series, so there's no shortage of material. And I'd like to maybe get Kahlan into a shorter dress, because it's hot in the middle of the summer. But that's about it. That's the only change I'd make.

This first season is far from over. Which has been the best episode so far, and why?

Regan: I felt that "Denna," our eighth episode, was the one where we all really felt we'd found our footing. That was when we had Jessica Marais come in to play [the Mord'Sith] Denna. That episode, as far as the writing, was the most faithful to the book. I felt that, in the beginning, the writers wanted to be really creative and come up with their own stories and have these episodes that had a beginning, middle and end. That's a hard thing, because the book is such a long-term journey, but they want each episode to have its own story, which has been the hardest part of it, because I love the book. But when they do follow it, which they did in "Denna," it had the grit and the violence and pain that Terry Goodkind paints so well in his books. The stakes are so high, and that episode really hit the nail on the head.

After a couple of weeks of repeats, Legend of the Seeker is back with original episodes. What's coming up?

The last time we spoke, you said that your mother had met Goodkind, but that you hadn't. Have you met him since then? Or heard from him?

Regan: No. I still haven't met him! Can you believe it? I hope he loves the show, and I hope he thinks we're doing his characters justice. That's what I hope more than anything, because I'm such a fan of the books and of Kahlan and Richard and Zedd. And if he wasn't happy I'd be so heartbroken, so maybe I shouldn't talk to him. I think he's put a lot of faith in the producers and the writers, and maybe that's best because they have taken so many liberties to make the show work for TV. But I think it still rings true.