Why Shyamalan let us on the Airbender set, what we saw and why it's special

After the less-than-stellar critical and box-office reception for his last two films, Lady in the Water and The Happening, director M. Night Shyamalan might have been expected to crawl into a hole somewhere dark and secluded, where he could ruminate over what went wrong.

Well, we're here to tell you he's holed up somewhere dark and secluded all right, but there's not an ounce of self-flagellation. Matter of fact, in the bowels of several massive complexes in the suburbs of Philadelphia, Shyamalan has gone in a direction that would surprise most: The man's gone epic in his new movie, The Last Airbender.

On June 16, SCI FI Wire was among a small group of reporters invited to visit the top-secret set of Night's upcoming live-action adaptation of the popular Nickelodeon animated series Avatar: The Last Airbender (the movie loses the "Avatar" to avoid confusion with James Cameron's own upcoming sci-fi epic).

This is no small thing: It's the first time that Night has let the press set foot on one of his locations or soundstages. On his previous films, lockdown was the name of the game.

So on this day it's something special for Night to give our small group carte blanche to observe the shooting of a pivotal character reveal, get a guided tour of the film's massive sets and even chat with him and much of his cast. The new openness is probably a response to the very public hits he's taken, but it's also part of Night's choice to stretch himself to outrageous new heights with some of what may be his savviest creative decisions in some time.

The movie marks a lot of firsts for Shyamalan. The Last Airbender is the first film he hasn't created strictly out of his own head; rather, it's based on the work of Michael Dante DiMartino and Bryan Konietzko, who created Nick's series. It's the first film he's shooting on extensive green-screen stages. And it's the first film for which he left Philadelphia to shoot some scenes (more on this later). 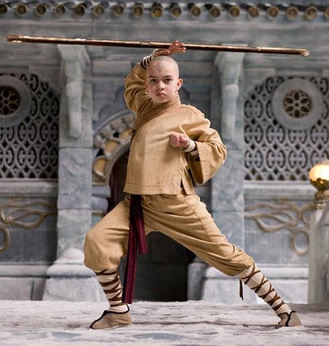 Fans of this engaging animated series will know that the story centers on a fantastical world that is separated into peaceful nations that represent the four elements: Air, Water, Earth and Fire. That tranquility is shattered when the Fire Nation wages a campaign of destruction against the other three nations with the intention of ruling them with an iron fist.

Over the course of a century, the world is nearly shattered by relentless battles until the only hope for peace appears in the form of Aang (Noah Ringer), a bald little boy with some serious kung-fu skills. An Airbender from the Air Nation, Aang discovers that he is the legendary Avatar, the lone human who can harness the powers of each element to restore balance to the ravaged world. Together with Katara (Nicola Peltz), his Waterbender best friend, and her headstrong brother, Sokka (Jackson Rathbone), Aang reluctantly goes on the journey to fulfill his destiny of restoring the world through his remarkable gift of "bending" the elements to his will.

Cast with relative unknowns or up-and-coming performers such as Slumdog Millionaire's Dev Patel as Fire Nation bad boy Prince Zuko, The Last Airbender is nothing less than Night's opportunity to create his own mythic cinematic series, his own Star Wars for this millennium. And the structure is already set up for him, since the animated series is conveniently broken up into books based on each element. The film series will follow suit, with the first film adapting Book 1: Water and subsequent sequels focusing on the next elements. And from the looks of the first film location we're taken to, this is not a franchise that is being created on the cheap.

In the heart of an old, decaying automotive factory about 10 miles outside of Philly, Night's army of 600 craftsman, techies and designers have filled every corner of a massive warehouse with detailed sets that are dizzying in their sheer number, scale and attention to detail. Gone are Night's trademark claustrophobic spaces and intimate environments, traded for the gigantic bow of a Fire Nation warship that serves as a staging area for our group. 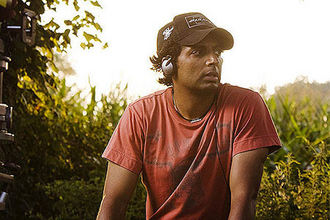 M. Night Shyamalan on the set of his last movie, The Happening

Across the way, there's a monastery set with columns of intricate bronze prayer wheels sitting idle in the dark. And along the walls behind everything hang green-screen curtains that will be replaced with computerized set extensions and visual effects for each and every scene.

Before we are allowed to wander the space, producer Frank Marshall references the drapes and says, "We are creating a completely fantastical, make-believe world. A couple of firsts on this film for Night: One is shooting all this green screen. He's never really done much of that before ... at all. And we went out of Philadelphia for the first time. We went and shot in Greenland for three weeks. It's really the first time he's shot on location, and that's another reason Kathy [Kennedy] and I were called [to produce,] because we have a lot of location experience with these big kinds of movies. He's expanding his talent and range, and that's what I find exciting about it. He's taking his filmmaking style and applying it to this fantasy world, which he hasn't done before."

We walk a few yards away from the mouth of a white "ice" cave, carved from foam and plastic and covered in a blanket of faux snow. Its steps lead into the mouth of a darkened bluish-gray cave that twists along for 40 feet before the path opens up into a glorious chamber that looks as if it was plucked from the canvas of a beautiful Asian landscape painting. High walls rise to create a cocooned oasis of (now dry) koi ponds, with green moss banks that lead to the stunning focal point: a towering, twisted-limbed, resplendently blooming cherry tree filled with blossoms. Even with the set not fully dressed for filming, the tree is a breathtaking vision, with 3,500 hand-placed tiny pink blossoms. It's called the Spiritual Place, where Aang will meet the Moon Spirit, and it elicits authentic goosebumps for what this place will look like once captured on film.

Eventually we come to the live set of the Northern Air Temple, where Night breaks away from his star Ringer, the delightfully enthusiastic anchor of this whole film. It's a relatively relaxed Night who ambles up to take stock of what he's creating around us. With about two weeks left of principal photography, Night admits he's coming out on the other side of a humbling process.

"It's been such a great growing experience for me as a director and a human being, because I am a complete control freak," Shyamalan says with a grin. "You know, I feel like a little bit of pain when I look at a frame and it's not right and I have to correct it. This has taught me there are just so many factors going on; it's doing two and a half times a [normal] movie of mine, so it made me go back a little bit and become a student. Any time you can become a student again, that's the way to do it. You learn again, and you are open about everything. I felt like I've become a much better filmmaker, because I have had to go through this process where it's just not possible for me to do that for 400 extras with the action going on. It's overwhelming. I am scared to death."

Shyamalan laughs with sincerity. "There are two and a half weeks left of not being as scared to death, but there were plenty of days where I was scared to death of what I'm doing," he admits.

One can only imagine what Night looked like a few weeks ago in the snows of Greenland or on the first day he shot on the biggest set ever created for a movie on the East Coast (which is inside an old airplane hangar about 15 miles away). But today he's got that famed Night confidence on full display, enthusiastic about how it's coming together.

The scariest beach movie since 'Jaws'? First reactions to M. Night Shyamalan's new horror film 'Old'
This Week in Genre History: The backlash to 'The Village' was the twist we should've seen coming

"It's so original, which has always been my hope: that it's not like anything else," Shyamalan explains about his vision for Airbender. "It's not really Lord of the Rings or Harry Potter or The Matrix or Pirates of the Caribbean. But there is a little bit of this and that, with me smothered all over it. There is pathos in it, yet it's really fun. You pray that it will find its own personality and will be its own self and the world will appreciate it for that."