What surprises are in store for Fringe's nefarious Agent Scott?

"They do answer some questions that have been lingering in my mind, like who he's been working for, exactly," Valley said in a conference call with reporters on Friday. "It sort of confirms the verity or the truth of his feelings toward Olivia [Anna Torv]."

Earlier this month, Fringe executive producers J.J. Abrams, Roberto Orci and Jeff Pinkner promised to wrap up Scott's storyline, which kicked off in the pilot, when it was revealed that Olivia Dunham and Scott were lovers and that Scott was working secretly to undermine investigations into "The Pattern."

Tuesday's upcoming episode, "The Transformation," sends the Fringe team investigating another airplane crash, while Scott appears to Dunham in her dreamscape. Valley talked about his appearances in upcoming episodes; the following Q&A features edited excerpts of the conference call. Fringe airs Tuesdays at 9 p.m. ET/PT.

Is this more of a mythology episode than a stand-alone mystery coming up?

Valley: You know, I have to see the final cut the way it comes out. Sometimes it depends on what parts of the story they choose to accentuate in the edit. I would say this is kind of, as they all are, a stand-alone episode. If you have been watching it, it will sort of enhance the experience of watching it.

Is there any room for John Scott to come back after this resolution?

Valley: You know, I think there's room for even you to be shot with a tranquilizer gun and dragged onto an episode of Fringe for a couple of scenes. It could happen to anybody, so I'm not going to rule it out.

Will we be seeing John in the flesh, or only in Olivia's mind from now on?

Valley: I can't really say. I think you'll probably see both, but I can't really confirm what condition I'm going to be in in either of those situations.

The next episode is about an airplane again. How is that different from the pilot?

Valley: It's a completely different airline [laughs]. The first one was a Boeing 627, this was an Airbus 380. No, I have no idea, to be honest with you. They were both big airplanes, and they have a lot of people on them. A lot of airplane crashes on J.J. Abrams shows. Could you imagine being on an airplane with J.J. Abrams, what's going through his head? Probably people screaming and luggage flying everywhere. 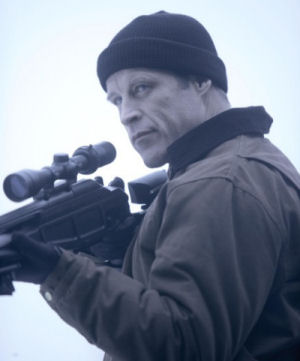 Is this a good place for new viewers to jump in?

Valley: I think any time is a good place to jump in. Then they can just buy the DVD edition for the first season and catch up on their own free time. It's probably the best way to do it. Yeah, it's exciting to watch the show as soon as the episode comes up, because that's when everybody's finding out about it, and it's somewhat of an event as opposed to just a discrete television show. So I'd say start watching as soon as possible and catch up when it comes out on DVD. Or you could probably download the episodes too. So get on board!

What has your contractual status been this season?

Valley: Well, contractually I can't really say too much. Basically, it's one of those situations like they have with most TV shows. They can keep you as long as they want, but it doesn't mean necessarily you can leave whenever you want. That's all I can really say about that. It's what they call a seven-out-of-13 or something. I had never signed up to be an every-episode regular.

Is it hard to portray Scott's moral ambiguity since we don't know yet if he's working for good or evil?

Valley: Well, I think whether he's good or he's bad, there's a degree of guilt that he carries around with him. Actually, now that I think about it, I actually forgot to play that. It makes a lot of sense, though, doesn't it? I think when you watch it, you'll have to make up your own mind about that.

Does it make a difference to your performance if he's alive or dead?

Valley: That's a really good question. I think when you're talking about John Scott being inside Olivia's brain, then you're dealing with a consciousness or the way someone remembers someone, as well as his own particular memories. I like to think that his consciousness is actually in her head, so it's actually as if he were definitely alive. No, I think when somebody's dead, your job's a lot easier. You just kind if lie there. You don't have to do anything. That's probably the big difference.