What the censors removed, Friday the 13th VII DVD restores

John Carl Buechler, director of Friday the 13th Part VII: The New Blood, told reporters that the newly released DVD version of his film will restore much of the glorious gore that MPAA forced him to remove, though only in deleted scenes. (The DVD is available now.)

"The one thing that had plagued me about this particular movie is the overall compromise of makeup effects that we shot," Buechler said in a news conference Wednesday in Hollywood. "That has everything to do with, I suppose, not just that I was directing the movie, but I have a big background in makeup effects, so that aspect always kind of bothered me. We shot it, and we kept submitting it, and they kept saying, 'You've got to change it,' to the point where it basically castrated the punchline for most of these setups."

Buechler said that the restored footage was only available on VHS tape and therefore in too poor condition to put back into the film, but admitted he would have loved to create an alternate or extended version of The New Blood. "If somehow we could take the footage from Part VII and [reprocess] it digitally to get back to where it should be, remix it and do the sound effects, that would be the [best]," he said. "You could re-release that movie now. I'd love to do a Friday the 13th Part VII, Volume 2 and be allowed to actually do all of the stuff and revisit those characters."

Kane Hodder, who played Jason Voorhees in Friday the 13th parts VII thorough X, revealed that he was excited to see the excised footage, even if it would only be shown as deleted scenes.

"The main reason I was excited they were going to re-release VII and VIII—which, you guys know I did four of them—I was told we might get the footage that was cut for Part VII," he said excitedly. "It's the thing that the fans ask me the most: 'Where are those scenes? Why couldn't we see them?' We were able to get it for this. The quality is not great, which you need to expect, but just the fact that you can see what we really did—especially with the head squeeze! That was the best kill in that movie, and you saw almost nothing of it. There's five major kills that you get to see how it really was, even the original sleeping bag."

Buechler started his feature directing career with the cult classic Troll, another movie that suffered from budget and time constraints. But The New Blood was made under the most difficult circumstances imaginable, he said.

"I think a lot of it has to do with the fact that ours was one of the single fastest movies ever made," Buechler said. "I had my signed deal to make the movie in January, and it was in the theaters May 13th. So I never got to make my cut with my music, my effects track, everything. We were submitting to the ratings board, the movie cut to picture with very simple temp tracks and music that wasn't going to be what it was, just to get the rating. And I think we submitted it 13 times, and we got 12 X [ratings]." 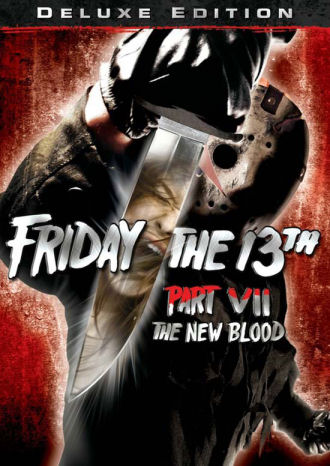 Buechler admitted he knew that the ratings board would challenge his vision, but he said that what was most important was finding a good rhythm for the film. "I started knowing that, going into it, that it was really an issue that the ratings board would have at that time," he recalled. "I think they gave an Alan Alda movie almost an X rating for saying 'f--k you' once. We kind of knew that was going on, so we went more for a big mechanical effects look as well as a makeup effects look, but as far as I'm concerned, horror is like telling a joke: There's the setup, the anticipation of it, and then there's the payoff, and the payoff is a nice, juicy makeup effect."

Overall, Buechler said that he was pleased with the theatrical version of the film, and is happy to see that audiences are still eager to experience his installment of the iconic horror franchise. "I'm pretty proud of the film," he said. "I think the fact that we had a full-blown subplot of a telekinetic girl kicking Jason's butt was lots of fun. I got to do a lot of cool stuff with the makeup effects—we designed and engineered something that I thought was unique at the time—that was all just fun stuff that we got to do, and the fact that we got a great guy inside of it to play the role, we both were of a single mind. We wanted this to be a more energetic, more dynamic version of the character than we had seen before, and I think we accomplished that."