What we saw (gunplay! body parts!) on the set of Denzel's sci-fi Book of Eli

SCI FI Wire was among a small group of reporters to visit the set of Denzel Washington's upcoming post-apocalyptic sci-fi action movie The Book of Eli on April 1 near Albuquerque, N.M., and we got to observe a kick-ass action sequence after speaking with directors and brothers Albert and Allen Hughes.

Warner Brothers describes The Book of Eli this way: Washington plays a lone warrior named Eli who fights his way across the desolate wasteland of near-future America to realize his destiny and deliver the knowledge in a book that can bring civilization back from the brink of destruction and save the future of humanity. The film's original screenplay is by Gary Whitta and Anthony Pekham.

The movie also stars Gary Oldman as the villainous Carnegie; Mila Kunis as Solara; Ray Stevenson as Redridge, Carnegie's enforcer; Jennifer Beals as Solara's blind mother and the concubine of Carnegie; and Michael Gambon and Frances de la Tour as George and Martha, an old couple with a big secret.

"It's just a man on a mission, with ... something that everybody wants," Allen Hughes tells us between takes. "It's pretty simple, you know? When one man is trying to get something somewhere ... an object or something sacred, ... and everybody wants it, then there's the conflict."

On this cold, windy day (the 40th of 61 production days) in the desert outside Albuquerque, the crew and cast assemble around a ramshackle farmhouse set off a dusty road, built as the home of George and Martha. Off in the distance to the east loom the Sandia Mountains, purplish in the morning. (The wind will get so bad that blowing dust will force the production to shut down early this day.)

The structure is a two-story light gray farmhouse that may once have been white, with a small gabled porch, rocks lining a path leading to the front door, tires embedded in the front yard encircling small, dead trees and one larger dead tree in which hangs a small birdhouse.

In front of the house sit four vehicles: A yellow and blue battered ice cream truck with armor plates over the sides and front; a bank armored car, all riveted plates and double doors at the back; an armored Chevy Suburban, with plates on the side windows and windshield, with a bullhorn on the left front fender; and the burned-out hulk of a Cadillac. 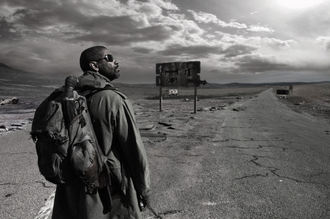 Littered in the front yard are (fake) body parts and wood siding from the front right corner of the house's first floor, which has been blown out by a rocket-propelled grenade.

"There was a gun fight with ... Eli, Solara and George and Martha, the old couple inside" in this scene from late in the movie, Allen Hughes explains. "And they were shooting, and Carnegie's men were shooting, and Eli, ... the first thing he threw out was ... a Claymore mine, and that's what blew up the Cadillac and all the body parts over there. They thought they were getting the book from Eli. And then, the second thing, Eli threw another grenade out, and that's when they said, 'Let's just get the RPG.' And blew that part of the house out."

Today's filming will pick up after that fight. After the rocket has destroyed the corner of the house, George goes to the kitchen in the back and picks up a machine gun. He goes to a side window and then to the hole in the corner of the house—and this is the shooting we observe from the point of view of a camera inside the house—and fires his weapon with a deafening report. Two guys fall. George runs out of ammunition and ejects his magazine; then we hear Carnegie yell, "Cease fire! Cease fire!" as the camera goes back to Eli and Solara at the right window. They see the armored truck outside back up toward the house. Its double doors swing wide, and a platform eases out, carrying sandbags and two figures, a man and a woman, seated at a massive Gatling gun. The woman begins to crank the gun; it rotates and fires with a deafening ratatat. Eli goes for the floor, crawls and takes Solara with him as the bullets hit and debris flies.

Earlier, we walked through the interior of the house as the crew set it up for the day's gunplay: It's pretty trashed (they shot the part with the RPG a few days earlier), the corner is missing, and the house is full of debris, including a flattened dining room table, a ceiling fan and other detritus.

The movie shot interiors at Albuquerque Studios and exteriors around the city and in the desert, including the small town of Carizozo, N.M., which was transformed into a western street, as well as in White Sands and elsewhere.

Though the movie has elements of the classic western in a sci-fi future, don't call it a western. "[It's] the thing that the studio has been scared of and Warner Brothers, even, like, 'It's not a western, it's not a western, it's not a western,'" Albert Hughes says. "And it's not a western, because ... it is set in the West, but it's not from ... that time period. But, at the same time, my brother and I have always been influenced by Sergio Leone and originally wanted to shoot this in Almeria, Spain, where they shot those spaghetti westerns, and we tip our hats a lot to those westerns. ... [But] there is some stuff, like, ... there's a bar, and it looks like a saloon, and there's ... [a] showdown and stuff like that, but I mean, you get those in cop movies, too." 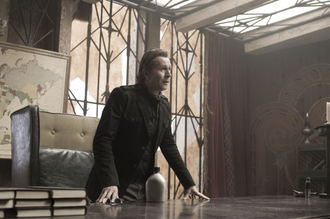 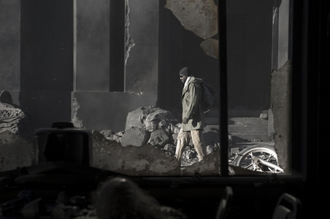 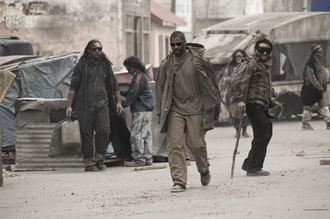