What we saw on the set of Land of the Lost (hint: Sleestaks)

It started as a routine expedition. In May of last year—just a month before the devastating fire that blazed through the Universal Studios backlot—SCI FI Wire was invited to the set of Land of the Lost to watch filming, interview the actors and gawk at the sight of a horde (or whatever the proper collective noun may be) of real, live Sleestaks.

Sure, they may have been just extras dressed in rubber suits, but for anyone who grew up watching the Sid and Marty Krofft TV show—on which the film is based—it was pretty impressive to see the creatures together on a massive, rocky set dubbed the Temple of the Sleestaks and designed look like ancient ruins.

"I was always afraid of the Sleestaks, too, when I was a kid," says star Danny McBride, who plays Will in the film, one third of the trio in the familiar song from the opening credits of the original series. "So it's pretty wild to step on the set of this movie and see them for real. It just kind of awakens those primal fears inside. You want to run and pee your pants."

McBride joins Will Ferrell, who plays discredited scientist Rick Marshall, and Anna Friel (of ABC's Pushing Daisies) as Holly, Marshall's research assistant. When the two go in search of a possible dimensional portal in the California desert, they end up taking a wild ride they never expected. But it all starts with a ride of a different sort.

"I'm a guy who owns this desert gas station in the middle of nowhere that has a little fireworks stand and a real crappy carnival ride," McBride explains. "And so, in order for them to search for readings on my property, I make them take this little tour and buy junk from my shop, and then I end up getting thrown in the mix with them."

Ironically, the inside of that "crappy carnival ride" was actually built on a stage at Universal Studios, just steps away from a legitimate amusement park full of movie-themed, multi-million-dollar attractions. We got a look at the "Devil's Canyon Mystery Ride" up close, after negotiating the tricky climb up to the raised set. The scenes involving them were filmed before we arrived, so the water had already been drained, but it was still adorned with cheesy plastic props and old Halloween decorations. This is the film's rabbit hole where Marshall, Will and Holly meet "the greatest earthquake ever known" and exit to find themselves in the title lost land.

Other sets we toured that day included various caves and wild landscapes built atop vast plywood platforms covered in fake vegetation and real dirt. It felt as close to roughing it as you can get inside a Hollywood soundstage. We also got glimpses of a field of silicone-looking egg sacks, some mysterious crystals and quite a few large insect parts and bodies, some of them recognizable, some of them not.

The scene we watched that day features the main trio going up against the Sleestaks. A fearless Holly snaps a leather belt and twirls it around in a menacing fashion. By this point in the film, she's shed the braids, plaid shirt and long pants she is first seen wearing (a callback to the costume worn by the original Holly), and is now looking none the worse for wear in cutoff shorts and a tank top.

Fans who may be a bit mystified by the casting of Friel in the role are not alone. The show never aired in her native England, so when she sat down to do her research on the character, she was a bit confused herself.

As it turned out, the script called for taking the character in a completely new direction. Now, Holly is a research assistant with a small case of hero worship when it comes to Dr. Marshall. It is Holly who ultimately discovers the evidence that his theory of alternate universes may not be as crazy as everyone else believes. Friel brings to the role a combination of British wit, charm and a little bit of attitude as well. It's also the first time in a long time she's been able to use her real accent for a role. 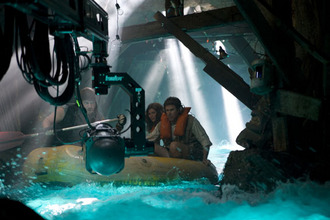 "If you can hear, I've got quite a regional accent," she says. "And I thought when I'd go to the audition again I'd have to talk in a very RP [accent] and be very British, or what most Americans imagine the British to talk like. And it's like, 'No, no, we want all the rough and ready edges.' So it's the first time I'm using my own accent since I was about 20, I think."

She's also been able to bring a little bit of her own colloquialisms to the script. In the scene we watched, she refers to the Sleestaks as "you googly-eyed wankers," a term she came up with herself.

"There's a lot of improvisation," she says. "A lot of the scenes we'll come in, and they're kind of the bare carcass of what we have to start with, and then we add all our stuff. And it's all my English-isms."

But then, when you're doing a film with Will Ferrell, improvisation is practically a given. Ferrell says he was part of the decision to change the nature of the characters from children to grown adults. There were just more possibilities for comedy that way, he says.

"We thought it might be a little more limiting to have me and two kids," Ferrell explains. "And we just sort of opened up the comedy a little more. And I think that's, for me, I think the kind of thing that I find interesting, of taking a TV show like this and while paying homage to the old show, you still have to make it new and different for an audience that has no idea that this was even based on a television show."

He thinks that even die-hard fans of the original will be pleased with the way he and the rest of the creative team—including writers Chris Henchy and Dennis McNicholas and director Brad Silberling—have found a way to reinvent Land of the Lost as a comedy without ever crossing the line into satire or blatantly poking fun at the original.

"I think we kind of have a great blend of like both at the same time," Ferrell says. "And we've loved just the slight twist that Holly's kind of an apprentice of Rick Marshall, and for some reason we got fixated on the fact that it would be fun to just have her be British. So I think for the pure connoisseur of Land of the Lost, I'm sure there'll be some people who are like, 'Oh, what are they doing?' But you've got to consider that you have, like I said, a whole group of people that will be watching this for the first time without any knowledge that this was based on a prior story. So I think hopefully we kind of did both."

Land of the Lost opens June 5.