What you loved, what you hated in the new V

Oh, Anna! Before the long ABC V break we found out about her ability to bliss out her entire fleet. And now we get a little TMI about her less-than-romantic sex life. (Big spoilers ahead!)

The entertaining return episode "Welcome to the War" gave us what we've been waiting for for MONTHS. We learned more about the Vs and dug in bigtime with the resistance. Many of the cliffhanging questions were answered as bigger and more interesting questions popped up. And of course, there were the occasional WTF moments that made you realize that if they were dealt with there'd simply be no show left to discuss.

About the important return episode for V, the Chicago Tribune's Maureen Ryan remarked: "Will 'Welcome to the War' cure your psoriasis, end world hunger and change the very foundation of Western civilization? No, none of the above. But it had a good amount of tension, it introduced a couple of potential-rich new story lines and it made me want to tune in to the next episode. That's all I can really ask of any hour of TV. ... The main thing is, 'Welcome to the War' has a better pace than some of the episodes we saw last fall; there's a tautness and a spark that was missing in some of last year's story lines."

During last fall's first four-episode "event," we were left with the Vs growing influence over the human population and the fact that they were planning to put a mysterious drug called R6 in our flu shots, and Val learned she was pregnant (although not that her baby daddy was a V). Erica and the fledging resistance blew up the warehouse filled with R6, only to have one of the V warehouse guards stab Father Jack in his church. Anna's daughter, Lisa, decided Erica's annoying son, Tyler, was "the one." Oh, yeah, and a fleet of V ships were on their way to Earth.

"Welcome to the War," which was written by new show runner Scott Rosenbaum, starts off with a kick-ass battle between Erica (Elizabeth Mitchell) and the same Visitor warehouse guy who stabbed Father Jack (Joel Gretsch). Luckily, she's an FBI agent and not a priest, so Erica was able to take out the bad guy. 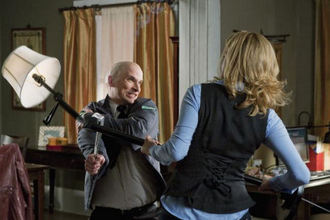 But with a dead V on her hands, as UGO.com's Alex Zalben comments: "Juliet kills the guard, they talk about how he had nothing to prove, and then ... Nothing. They don't skin him and show him to the news. They don't even get rid of the body, he just disappears. It's these lazy little plot points that they had the time to explain previously, that get no explanation now, as it's go, go, go."

Meanwhile, Father Jack is rushed to a Visitor Healing Center, which means healing and R6 for him, while Erica goes after her still-annoying teen son Tyler (Logan Huffman), who's on the V ship and who the Vs aren't quite ready to send home (what with him being "the one" and all, we're guessing).

Since Tyler is 17, it's not clear why Erica doesn't just put her foot down mom-wise and insist that he get his ass down there. It would be really bad PR for the Vs to be holding an FBI agent's underage son without her permission, but again, it's "go, go, go" time.

The fun part really starts when FBI Erica joins the investigation on the warehouse bombing and finds the Vs are pinning it on a world-class terrorist and mercenary named Kyle Hobbes (Charles Mesure). No dummy, Erica decides that Hobbes may be able to help train them in the fine art of war against the Vs.

As far as that goes, why hasn't anyone asked Ryan (Morris Chestnut), a V, what the heck is really going on? He has to know more than he's told them (and us) so far. So, Ryan, whazzup? Like maybe he could tell them the best way to kill a V, where they are from, and why they are there? Wouldn't you be asking like a million questions if you were Erica, Georgie (David Richmond-Peck) or Father Jack? 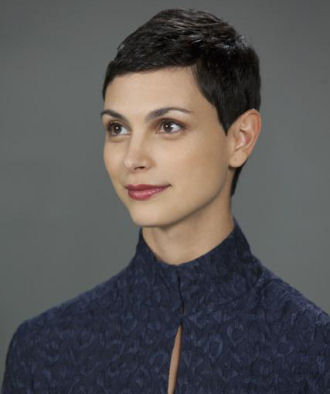 We also get to see Anna (Morena Baccarin) spar with Chad about doing a Healing Center news piece in an attempt to get more humans to trust the Visitors, and Chad (Scott Wolf) caves. I'm still on the fence about Chad, although his encounters with Anna are interesting.

What I'm not on the fence about is the fascinating characters Baccarin and Mitchell are building as the main players in this war. If V succeeds it will be because of these fantastic actresses, and I can't wait to see a face-to-face with them.

Elsewhere, Tyler heads home and admits to Erica he's a Peace Ambassador. Loved that moment when mom realized her son is unknowingly bugging her house with his fancy V suit. It was a great acting moment for Mitchell.

On the other side, Val's pregnancy gets weirder (like she almost eats a dead rat), and the writers seem to be going over the top. It was a nice nod to the rat-eating moment from the original 1980s V mini. Ryan touched base with a V doc (Lexa Doig) to investigate the R6 and discuss Val's (Lourdes Benedicto) "abnormal" pregnancy. Apparently Vs and humans aren't supposed to be able to procreate. Surprise!

An analysis of R6 reveals that it's a molecular compound that embeds itself in human DNA and emits a transmission, or tags humans. Later we discover that the R6 tagging is a way to look for candidates for "the next phase," and Father Jack is now one of those candidates. Maybe the Vs saw Lost when Mitchell played Juliet on it, and Lost's Jack and Hurley are now multi-candidates. Imagine what fun the smoke monster could have on one of those V ships. Especially after seeing that V clock countdown on Lost.

With the V Fifth Column resistance and the human resistance being pesky (and blowing up their R6 supply), Anna decides she needs to make an army. It turns out Anna isn't just the leader of her people, she's the queen. As in queen bee. Apparently that involves sniffing the best of her ships' soldiers and mating with one. After that, "It's done," and, well, her eggs do need nourishment, after all. We (and that appealing-smelling naked soldier dude) discover Anna's nourishment involves really, really big teeth! No more worries for him!

In the end it's a mixed bag for reviewers:

While Alan Sepinwall liked parts of "Welcome to the War," he wrote in his blog: "Rosenbaum has to mostly play the hand he was dealt by the previous creative team, and there's only so much he can fix at once, especially since 'Welcome to the War' also has to serve as a kind of refresher course for the series after the long time away. So we're still stuck with Elizabeth Mitchell's annoying teenage son getting played by the Vs, still stuck with a cast that isn't terribly charismatic outside of Elizabeth Mitchell and Morena Baccarin, still going through the motions we expect from this story, whether we saw the '80s show or not."

However, Eric Goldman of IGN.com stated: "I have to admit, I was nervous about this episode of V. I felt the series got off to an uneven but intriguing start last fall, but there were notable issues to work out—and knowing that the series had halted production and gone through some big changes behind the scenes had me prepared for a big mess. ... Instead, I found a show that felt more confident than before and seems well on its way to becoming something really special. Which is to say, welcome back, V!"

So what did you think? Are you ready to welcome back V and see what Anna's big teeth are all about, or not?