There's always been plenty of loss and death in the Harry Potter series, but Harry Potter and the Half-Blood Prince—the sixth film adaptation of J.K. Rowling's book series—arguably features one of the most gut-wrenching character losses of the entire epic story. (Major spoiler alert if you haven't read the book or seen the movie!)

When Hogwarts headmaster Albus Dumbledore (Michael Gambon) is felled by a killing curse administered by fellow professor Severus Snape (Alan Rickman) as Harry Potter (Daniel Radcliffe) looks on helplessly, it's a seminal moment that rocked the world of readers. In capturing that moment on film, director David Yates and his cast hope they earn the same reaction from moviegoers as well.

Last week at a New York news conference, Radcliffe and Gambon talked about how Harry and Dumbledore have evolved together as characters leading up to the professor's demise.

"The big change for Harry this [film] is his relationship with Dumbledore," Radcliffe said. "Previously, it's always been very much teacher and student. This year, it changes to a general with his favorite [lieutenant]. Harry has become a foot soldier in this movie and is happy to be so."

Radcliffe added: "Also, in all the other [movies], you see Harry going, 'We're going to get Voldemort!' But he never really does anything towards it, whereas this year he actually is part of the planning in trying to do something about the actual destruction of Voldemort."

With four Potter films together under their belts, Radcliffe and Gambon found that their real rapport made it easier to play the changing relationship between the characters, Gambon said. "Dan and I get on very well together, and we have to in this film, because he takes over, and I get weaker," he said. "Every time we do a take, we then go outside and laugh, then go back and do another scene. And it sounds a bit churlish, but I have deliberately developed a relationship with Dan in order to achieve some harmony between us. I think that's the only way to do it."

Radcliffe said that one of his favorite moments with Gambon came while shooting the scene in which Harry falls into a lake infested with the undead Inferi and rises out of the water to find a restored Dumbledore wielding his magic. 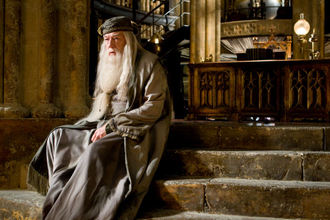 "One of the coolest moments of my career was bursting through the surface of the water, being surrounded by a circle of real fire," Radcliffe said. "Then I get to climb up onto the central island, where I look up and see Michael Gambon there looking like God or Moses swirling fire around his head. It was one of those moments where I went, 'I will never—it does not matter how many more films I do—I will never have this scene or anything like it ever again."

Lamenting the loss of his acting partner, Radcliffe offered, "it's very sad for me, because I won't get to work with Michael much in the seventh film. We have a great time together."

But Radcliffe said he is very satisfied with how Dumbledore is remembered by the Hogwarts family in a final stirring tribute to their leader. "I think it's actually a really moving moment, when our wands are raised in salute, and the Dark Mark in the sky is slowly eroded by this white light," he said. "It's a wonderful moment. It was a hard scene for me, because at the time of filming, I had never lost anybody close to me. You can never hope to imagine what that must feel like, so I was in a way having to imagine the feelings, and I hope if it came even a third of the way close to it being real, I am happy, to be quite honest."

As for Gambon, when asked if he was able to nick anything from the set as a keepsake, he laughed and said, "You can't take anything off that set! Everyone wants a wand, but you can't get one. I think the only successful guy at that is Rickman."

Gambon said that he will miss his stint as Dumbledore. "I'll miss everything, even the costumes," he said. "When I saw Richard Harris [the original Dumbledore] in the first two films, he wore very heavy costumes. You could see the weight of them. My costumes were made of silk and were very fine and easy to wear. It goes on in two seconds. I will miss that," he said with a laugh.

Harry Potter and the Half-Blood Prince is in theaters now.