For fans of J.K. Rowling's Harry Potter books, part of the fun (and, some would argue, disappointment) in seeing the film adaptations is spotting the various changes and omissions that take place in the translation from novel to film. (The upcoming sixth movie, Harry Potter and the Half-Blood Prince, even contains two new scenes not in the original book; more on them later.)

Plenty of fans then race to Potter message boards or just engage in heated debates with friends about what was shockingly left unexplored or tweaked from canon.

They're not alone: It turns out that the creative team behind the final three film adaptations—including Half-Blood Prince director David Yates, screenwriter Steve Kloves and producer David Heyman—are pretty much guilty of doing the same thing. (The movie opens Wednesday.)

In a news conference last week in New York, the trio admitted that they too have the same intense—and sometimes heartbreaking—conversations about what ultimately makes the cut and why. "We have conversations about that all the time," Yates explained to reporters. "And it's about how much exposition we have, ultimately."

Kloves, who's adapted almost every Potter book for the screen, explained that the process of whittling down material from each book has been torturous. "I think I make an initial judgment of how much freight the movie can carry, and at this point there is only so much in terms of character introductions, etc.," he said, adding: "We have long discussions about it at times, and we have to make decisions ... to make them lean where we can. It's always hard, because we are all fans of the books. So I try to do the impossible initially and sort of put everything into the script, much to the annoyance of my collaborators. I then make some tough decisions, and then we all do some heavy lifting."

"Sure, there are things that I miss," Heyman said. "One of the things that I love about Jo's [Rowling's] books is that they are so detailed and so rich. Every page has some jewel ... that you hold onto. One of the things I think Steve has done so brilliantly is that he's gotten as much in as he has. I'm really proud of that. I would love for there to have been more. Every film there's something we cut out where you go, 'Oh, that's a shame. I wish we could keep that in.'"

Asked if there was ever anything that Rowling forbade them to cut, Heyman said yes. "At one point in the fifth film, we were going to cut out [the Black family house elf] Kreacher, but when we showed Jo the script, she said, 'No, I think that would be a very bad idea,'" Heyman recalled with a smile. "She didn't tell us why." As it turns out, Kreacher plays an integral role in the climactic resolution to the series in Harry Potter and the Deathly Hallows. "So Kreacher was kept in and will be in the seventh film, too," Heyman said.

As for the upcoming Half-Blood Prince, much of the book revolves around Professor Dumbledore (Michael Gambon) and Harry Potter (Daniel Radcliffe) as Potter watches the captured memories of young Tom Riddle in his pre-Voldemort days. That structure alone provided Kloves with a problem because, as any good writer knows, you can't set a film almost entirely around or inside someone's flashbacks.

"I think this one was challenging because much of the book lived in the past," Kloves said. "But David is very adept at putting you in the moment, and it's where he wanted to put us in this movie, so a lot of decisions went from there. So we chose what memories to focus on—the ones that were the most emotional for Harry, Dumbledore and that inform the audience about Voldemort's past and the mystery that lies at the core of this movie."

Being in the moment also meant that director Yates made a conscious decision to forsake precious onscreen time with extraneous backstory setups or reminders of what came in prior films. "I think very early on we talked about the notion of putting this story in the moment and allowing the audience to just parachute in and go with it," Yates said. "They are really tricky, tricky, tricky books to adapt, because there is so much plot and so much detail that Jo weaves into this world. It's very hard to make those decisions about what's left in or what's left out. We've gotten to the phase in these movies where we all feel it's a good thing to just get the audience to buckle in and go and not weigh the audience down with too much information about what's gone before. They can always go back to the DVDs and the books." 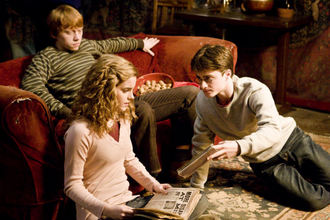 Even with so many Potter films under his belt, Kloves admits that when faced again with the hard creative decisions, he always goes back to the one request that Rowling made of him when they met 10 years ago. "The first day I met Jo we hit it off pretty easily," Kloves remembered. "We went for a walk, and she said to me, 'Look, I know the movies can't be the books. I know they will be something different. But what is important to me are the characters. Stay true to the characters.' So, in a sense, I see myself as a guardian of the characters. I want to make sure their motivations and the essence of them is always maintained throughout. Changes will happen, and as you make changes in one film, that gets compounded when you make changes in the next film. But I also try not to be too slavishly connected to the books when I think it defeats the drama of cinema."

In Half-Blood Prince, Yates said Kloves captured Rowling's intent and spirit right out of the gate. "I read Steve's first draft on the plane on the way to Chicago when we were doing the testing for Order of the Phoenix," the director recalled. "It was a very stressful time, ... and I pulled this draft out of the bag. ... See, when you develop films the first draft is not usually the best. But the amount of work that Steve puts into a first draft made it so exciting to read it: the tonality, the spirit, the mood and the heartbeat of the film was absolutely there."

Heyman says that Rowling approves of the adaptations. "I think Jo really feels like [Steve] has her voice," he said. "He understands it, so he has the confidence and comfort with the material to even put things in [the films] that aren't in the books, but you aren't aware that it isn't in the book, as it feels so organic."

To illustrate, Yates pointed out two newly scripted scenes, including one at the opening of Half-Blood Prince, in which Harry reads the Daily Prophet in a London dinette as he awkwardly attempts to flirt with a Muggle waitress. "That's a scene that Steve came up with, and I love that scene and think it's very charming," Yates said.

The other is an elaborate mid-film Death Eater attack on the Weasley home led by Bellatrix Lestrange (Helena Bonham Carter). Asked why it was added, Yates said, "It felt like the middle of the story needed an injection of jeopardy and danger that doesn't exist in the book. When we were developing the script, we felt there was a lot of comedy and lightness that continued too long. So putting some jeopardy in the middle just felt like it would remind the audience that the world beyond Hogwarts is still a very dangerous place, and it would put us back in terms of the outside narrative staying fresh in the audience's minds."

"The other reason for the attack in the middle is that in the book there is lots of description of what the Death Eaters are up to, mostly told through newspapers and reports," Heyman added. "We thought it was important that there is a tangible expression for that, so our kids aren't just reading or hearing about it secondhand. It was about experiencing a Death Eater attack on something so precious to Harry and Ron—the Burrows—that they are made vulnerable. It made the danger feel much more real and immediate."