What's behind the numbers in the 'stitchpunk' film 9?

In Shane Acker's haunting post-apocalyptic "stitchpunk" animated movie 9, the characters are tiny hand-stitched doll-like creatures, each named for a number. The main one, who awakens last, is called "9," and Acker says that the numbering/naming of his creatures was not accidental.

"I was just having fun and kind of exploring this idea that these numbers would be versions in some way," Acker said in an exclusive interview last week in Beverly Hills, Calif. "As the numbers get higher, the sophistication of the creatures gets more complex and more refined. So when 9 comes along, he is the last version, the most up-to-date version, the most complete, who has a larger, more holistic view. We just bought into that conceit, and then we tried to have as much fun with that as we could. What does the number 6 mean? What kind of emotions does that elicit, that number? What could this character be? So we tried to separate them all, as they all have their own strengths and their own weaknesses, and together they're able to complete themselves, and they become a whole once they finally get working together."

Is mysticism overtaking science in sci-fi?
How Shane Acker's 9 will differ from other apocalypses

Jennifer Connelly provides the voice of 7, a female figure who fights mechanical beasts in the wasteland. She expressed surprise at Acker's explanation. "I never heard that, but I guess in the way that they're constructed, perhaps I can see it," Connelly said in a separate exclusive interview. "9 is really the one who makes sense of it all and puts it all together and sort of finds the key. So I guess they all sort of have different elements, different strengths, but he's sort of able to integrate all of their strengths."

Elijah Wood provides the voice of 9 himself. His character comes to believe that there is hope in the wasteland and finds himself defying the rule of the first creature, 1 (voiced by Christopher Plummer). Unfortunately, 1 exerts a great deal of influence over creatures numbered 2 through 8, and therein lies the story.

"He comes into the world late," Wood said of 9 in a separate exclusive interview. "So 1 has already established a kind of rule over the other characters, largely due to fear, staying away from the machines, not getting any answers and living cloistered in a tower. I love the fact that 9 comes into that world sort of naively but sort of wisely, and sees that that's not necessarily the way for them to live, and they're actually putting themselves in greater harm. If they simply asked the greater questions to find out who they are and what they are, they can get at what's ultimately keeping them cloistered away." 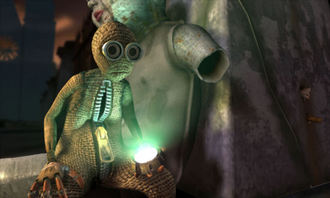 Acker knows that he faces an uphill battle trying to get audiences to relate to his abstract characters with their numerical monikers. "The basic idea is we're trying to show that these creatures are human, that they are the vessels of humanity," Acker said. "I think by starting so abstract, they're strange creatures. They're at a completely different scale. They're mechanical in some way, made up of bits and pieces of leftover objects, and they have numbers. That seems so far removed from humans. So then the challenge is, how do we slowly convince the audience to see the humanity inside them? So maybe it's better that we start so far removed, so by the end of the movie you start to understand who they really are."

Giving them familiar movie-star voices may help. Often animated movies incorporate the likenesses of their celebrity voices, but it's hard to put Elijah Wood's face on a rag doll. "I think that's kind of exciting," Wood said. "I think it's exciting to add a voice to a character that doesn't look anything like me and is not very familiar, necessarily. I think that the design of the characters is really unique and really beautiful. Shane has really created a world, I think, with this animation style and with this sort of post-apocalyptic world as we see it. So I think the character has big eyes and is sort of relatively expressive, but I don't necessarily know if I see any of me in the character beyond my voice."

Numbers also play an important role in 9's release date. It just so happens that Sept. 9 of this year falls on a Wednesday, which is an acceptable day to release movies. 9/9/09 is just a fortunate coincidence, said Acker.

"I mean, the whole production got pushed back about a year, so we were going to release in 2008, actually," Acker said. "So we're just very fortunate that we got pushed into this year and that that date was available and happened to be an opening day. It wasn't preplanned. It wasn't by design."