Family Guy creator Seth MacFarlane said the next installments in his Star Wars spoofs will mine jokes on Hoth, Cloud City and Endor and pull in characters from his other shows.

"Certainly the big worm coming out of the asteroid is a big comedy moment for us," MacFarlane said in an exclusive interview over the weekend in Pasadena, Calif., where he was promoting The Cleveland Show. "The snow battle is kind of a nightmare, but we put enough jokes in there to sustain it. Visually, we have to duplicate so much of what went on in the movie, and [for] 1980, it was still so visually complex, and we had to match that. It was very difficult, to say nothing of trying to insert a joke every 15 seconds or so."

Why Family Guy's Empire spoof made Lucas squeamish
How the Trek: Next Generation cast beams into Family Guy

The upcoming spoofs follow on the success of MacFarlane's first take-off, Family Guy: Blue Harvest. The episode lampooning The Empire Strikes Back is titled "Something Something Something Dark Side." "Empire is almost done," MacFarlane said. "It'll be ready for the holidays. And then Jedi, we have our first animatic screening this coming week," he added, referring to the Return of the Jedi episode.

The Jedi episode is called "We Have a Bad Feeling About This." By the time he got to Ewoks and Jabba the Hutt, MacFarlane had to cast characters from his spinoff shows.

"We're running out of Family Guy characters to add in," MacFarlane said. "That's why for Jedi we've used characters from The Cleveland Show and from American Dad." 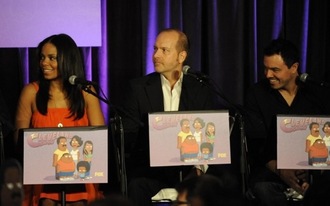 MacFarlane looks forward to doing a classic Han Solo line in the voice of Peter Griffin, who plays Solo in the spoofs. "'Why don't you use your divine influence and get us out of here?' Most intense line reading ever," MacFarlane joked.

Even though he says the complexity of the 3-D animation and mimicking Industrial Light & Magic's effects sequences nearly kills him, MacFarlane says that he still has ambitions to spoof other genre classics with his animated families.