Who won the Big Gay Battle between Dr. Horrible and Capt. Jack?

The voting is over for AfterElton.com's Gay/Bisexual Man of the Decade poll, and the winner is ...

AfterElton said there were more than 80,000 votes cast, with more than 600 write-in candidates. Click on the chart below for the full results. 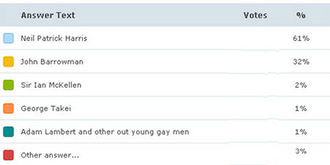 Harris accepted graciously in a statement on the site, which we've excerpted below:

Huzzah! At last, I have risen atop John Barrowman! While excited, I must admit that I was worried he wouldn't like it. And yes, it may have been uncomfortable at first, but I soon saw that he was enjoying himself and, therefore, so did I. Good times. A fine way to start Aught Ten.

Joshing aside, I was pretty amazed at how this took on a life of it's own. Big thanks to everyone who threw a vote my way, but even bigger thanks to those who rallied their legions of fans on my behalf. That was very cool. (Jimmy Fallon? Totally unsolicited? How nice was that?!?) Thanks also to Michael and the gang at AfterElton.com, who seem to be the real winners. And to Twitter. My Twitter followers rock.

Mr. Barrowman, sir, well played. We have never actually met, but know that I am a fan of yours onstage/screen and off. You are a true class act, and represent yourself extremely well. Happy Decade to you.

Do you think the best big gay man won?