Who's confronted and what's revealed in Fringe season finale

As Fox's Fringe builds to its second-season finale, we get word that the confrontation we've been hoping for will indeed take place, as well the big revelation that's coming. (Big spoilers ahead!)

"William and Walter will finally face off in the finale," Goldsman told Entertainment Weekly. "These [characters] have so much that they're bringing to bear. And Leonard and John are two fantastic actors."

Goldsman is directing the episode, which was written by executive producers Jeff Pinkner and J.H. Wyman. 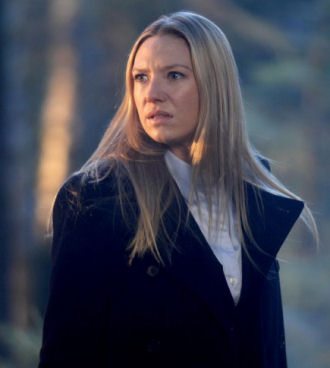 And in our own exclusive interview with Pinkner about how the season will progress, he told us, "Olivia we'll find this season that in order to identify and defeat the bad guy she's going to have to ... allow herself to be open to what Walter and William Bell did to her as a kid. She's going to have to allow these inherent abilities of hers to come to the surface so that she can identify and then stop the people who are trying to open up the corridor to the other side. And she may fail."

We're guessing some of Olivia's angst will pop up as early as next week's "Jacksonville," which Fox is calling Fringe's "Winter Finale." In the episode's official description,

"Worlds collide with unthinkable results in the FRINGE winter finale. A Manhattan office building is rattled to its core, leaving only one survivor (guest star Jim True-Frost), and the Fringe Team examines his otherworldly origins. Once Walter (John Noble) surmises that what shook the building was something he discovered many years ago, the team races to Jacksonville to help Olivia (Anna Torv) reconnect with her past in order to avert what they fear will happen next."

After that episode, Fringe is off the air until April 1, making way for Fox's new reincarnation series Past Life. But when we come back for those finale episodes, it sounds like it's going to add up to more William Bell (which means more Nimoy) and more Walter, with Olivia and Peter (and Thomas Jerome Newton, aka the Frozen Head Guy, played by Sebastian Roche) in the middle of it all.

Will you hang on to the very end?