Who's Matt Smith: Why the new Doctor is a 'bit bonkers'

In the first few minutes of the new Doctor Who season premiere, "The Eleventh Hour," you get a pretty good idea you're in for something completely different with the newest and youngest incarnation of the Doctor, Matt Smith. American audiences will finally get to meet him on BBC America on Saturday at 9 p.m. ET/PT.

Smith admits he's thrilled with the opportunity he's been given to play the legendary character. "I knew that the multitudes of the character are so vast and so varied, and that's why it's probably the greatest part in British television, because there is no other character that you can be that bold and that brave and do it in your own way as much as you can with the Doctor. He's pretty off. His mind is just mad," Smith said in an exclusive interview.

Doctor Who: Jodie Whittaker, showrunner Chris Chibnall set 2022 exit with trio of specials
David Tennant has a theory of how the 10th Doctor and Rose ended up, and it ain't pretty

We get to see exactly how "mad" he is in the premiere, when the 11th incarnation of the Time Lord has to deal with not only finishing his regeneration (from the 10th Doctor, David Tennant) but also has to save the world in 20 minutes. All that with a smashed TARDIS and a sonic screwdriver that's got issues.

Tennant and Doctor Who reviver Russell T. Davies left the series last year after several specials. In the last special, Doctor Who: The End of Time, Tennant regenerated into Smith. So for season five (or the new season one, depending on how we count it), we have a new Doctor, and the series is now being helmed by Steven Moffat. The Emmy-winning and Oscar-nominated Moffat has written some of the show's finest episodes and also won BAFTA and Hugo awards for his work on Who.

Naturally, taking over "the greatest part in British television" has its risks when it comes to reinventing the series yet again, even with the talented Moffat at your back. After all, how do you make it Doctor Who and yet different enough not to suffer by comparison to the 10 chaps who were the Doctor first? 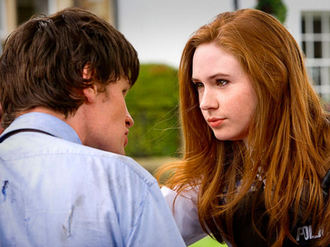 But that's not something that worries our new young Doctor. "I mean, we've got a different writer, different human being, and so for those reasons alone it will be very different by definition," said Smith. "I try to make it sort of my Doctor, so he's a bit bonkers and hopefully his brain seems very quick and very inventive. I hope as the series progresses with the weight of time, the gravitas of the man really comes through."

And luckily, the Doctor doesn't have to go it alone anymore, as Tennant's Doctor did. He's got a new companion named Amy Pond, who's played by Karen Gillan. "I think she challenges him, particularly with this incarnation. I think she is as mad as he is, and I think together they make mad pair, and he sort of feeds off of that. But he really needs her. I mean, just practically she saves his life all the time. She's a real challenge for him."

But will there be romance, the type Tennant's Doctor had with Billie Piper's Rose? "If I told you that I'd have to kill you," said Smith with a laugh. "I can't tell you, 'cause I don't want to kill you."

What he will tell us (without any death threats) is a hint of where the Doctor will take us this season. "Oh, wow, everywhere. You know, he takes you to the future. He takes you back to 15th-century Venice. We meet the Daleks. We meet the Weeping Angels. We meet the Silurians. It's really all over. We go to Provence, France, and meet Vincent van Gogh [in an episode] which was written by Richard Curtis [Blackadder]. There are many splendid, wonderful adventures to be had," he said.

Smith, an accomplished theater actor and up-and-coming television actor even before Who, confidently acknowledges that while playing the Doctor is a dream role, he doesn't think it will typecast him. "I would defy anyone to say no to it, to be honest. It is so brilliant. It allows you so much invention as an actor. It's incredible," said Smith. "I think I'm the sort of actor who can hopefully reinvent himself, and I actually think it will open more parts for me."

In the meantime, he's the Doctor, and he's got a message for you Americans. "I think it's been the best show on British television for many years now, and I mean I certainly want the people of America to get on board and understand it and, hopefully, enjoy it," he said. "I love playing the part, and I would like to do it definitely for another year, if not two. I want to take him further and further and just push into corners that he hasn't been before."