Who's the real monster in Being Human's second season

The first season of the British supernatural show Being Human, now airing on BBC America, shows that it's hard for monsters to fit in with people. A vampire, a werewolf and a ghost try to suppress their violent natures, while others of their kind try to peer-pressure them into rampaging. Series writer Toby Whithouse said that the upcoming second season will focus on human threats.

"In [season] one, the threat is supernatural in the form of Herrick and the other vampires," Whithouse said in an exclusive interview on Wednesday at the Television Critics Association summer press tour in Pasadena, Calif. "In [season] two, the threat is human."

Bringing more humans around particularly affects Annie (Leonor Crichlow), the ghost who is suffering from her invisibility to mortals. "She makes the decision to stay in her home, so she's now on a journey of even further discovery of her sense of self," Crichlow said in a separate group interview. "She's here forever, so she's got a long time to do it."

Midway through season one, Annie begins making the leap from ghost to poltergeist, so by season two she'll have more power to interact with humans. "The doors open up," Crichlow said. "As she becomes much more comfortable in her poltergeist state, if that's the correct terminology, she is able to be seen and interact with human worlds. She's getting there this year. She gets there, and she gets in and out. By season two, yes, she's interacting full throttle. She still doesn't change her clothes, though."

At the end of season one, werewolf George (Russell Tovey) fights off Herrick (Jason Watkins), the evil vampire trying to corrupt the trio of monster friends. That's nothing compared to the threat of people.

"I think that's far scarier because it's dark," Tovey said in a separate group interview. "At least you know where you are with a werewolf. Once a month you leave them alone ,and the rest of the time they're fine. Human, you never know what they're like." 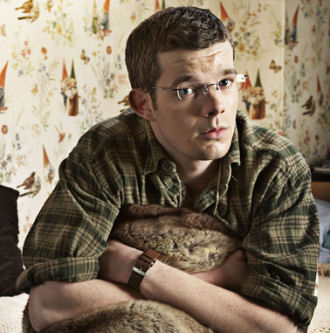 Of the trio, George may be fighting the hardest to blend in with human society, chastising his vampire friend for indulging his bloodlust. Maybe George should be careful what he wishes for, because having humans around only makes things worse.

"Being exposed is their, especially George's, biggest fear," Tovey continued. "I think when he puts himself in a position when he's in contact with human beings, that runs the risk of more exposure."

Playing the vampire Mitchell, Aidan Turner concurs with his co-star that humans are a more frightening threat than the monsters they faced in season one.

"Now it's the human which is way more bloody scary in my book," Turner said in a separate group interview. "That's something we can't control. We've read the first three, and they're amazing. They're getting to places that we didn't think they'd go to."

Don't worry, there will still be plenty of monsters in season two. Whithouse clarified that the human threat would not replace any supernatural mojo. "[It's] inevitably [supernatural], because they're never going to lose their curses," Whithouse said.

Whithouse will stick to his core three species, though: werewolves, ghosts and vampires. "Not out of any kind of editorial policy, just because I can't really think of one that wouldn't somehow break the genre," he said. "We've thought about 'Oh, we could put a zombie in.' Then somehow it just instinctively doesn't feel right. I can't tell you why, but it just doesn't feel right. At the moment, it's just our three main guys."

The closest Whithouse got to adding another creature was a human with extra abilities, but that's kind of akin to the ghost. "I've got a psychic in [season] two," he said.