Why are DC movie fans so angry about Justice League criticism?

One of the more precarious situations I've ever been in was in a place that should've been safe, but wasn't. That was built to bring joy to millions of people, but instead incited a blinding rage in hundreds. It's now known by a different name but it was Giants Stadium. And the event was a Philadelphia Eagles football game.

Yeah, I know. Sports. Bear with me.

Every one of the 40,000-plus people in that stadium was there because they loved football. They were fans. Attending a football game is too expensive to be idle about it. You have to love it. It just so happened that some of those fans chose — or, I'm sure some would claim, were chosen — to call themselves New York Giants fans while others were Eagles fans. Bordering states. The difference between those people was marginal at best. But if you put green jerseys on some and blue jerseys on others, stuff them into an open-air coliseum, and let them buy beer for two hours — you are going to have to call a lot of police.

Epithets will be hurled, fists will fly, blood will arc through the autumn air. Why? Because human beings are tribal beasts. We want to belong. We want to clad ourselves in the colors of our tribe and woe to any who choose other colors.

Tribalism. All too often based on arbitrary distinctions, especially when you're talking about entertainment.

Marvel vs. DC. Twenty years ago, it was just a discussion between nerds, nerds who had been collecting comics for decades and would hold imaginary bear vs. shark matches in bedrooms and dens — Batman vs. Iron Man, Deathstroke vs. The Punisher, Thor vs. Wonder Woman — while lamenting the fact that we'd never see those heroes on the big screen, not the way they should be. Stan Lee would refer to DC as the "distinguished competition" in public, while likely saving the harsher language for behind closed doors, while editors gamed out how to steal market share. 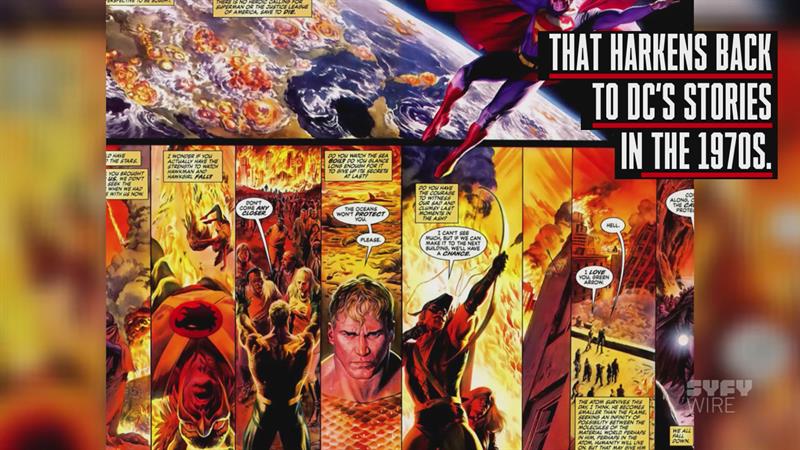 Hundreds of millions spent to produce. Tens of billions of dollars in revenue. Hollywood reformatted itself to favor characters instead of movie stars. And no characters are more important than superheroes.

Instead of being happy at this frankly astonishing development — we were seeing long-dismissed dreams come true — some fans were furious. Because tribalism is an inescapable son of a bitch.

Now, that stadium that barely contained the rage-fire rivalry of spectators was called "the internet." And instead of it being alcohol that dropped inhibitions and blurred common sense, it was anonymity.

Marvel fans were happy, for the most part. Sure, many of the big characters couldn't appear on screen together — thanks to Stan Lee having strip-mined Marvel's IP and sold much of it off, piecemeal, all over Hollywood — but once Iron Man took off and plotted a course towards The Avengers, it didn't matter. What was to be unhappy about, after all? After Avengers made $1.5 billion, we were never going to stop getting Marvel movies — even if every couple are only so-so.

But DC die-hards evolved… differently. They had their Batman done as well as anyone could do Batman. Nolan's trilogy made $2.4 billion around the world. It won Oscars. The Dark Knight especially remains beloved; a high-water mark that no other comic book film has yet touched.

If you tell a Marvel fan that Thor: The Dark World kinda sucked and Iron Man 2 was a sprawling, unfocused mess, they'll shrug and say, "Yeah, I kinda liked 'em. But you're right."

But if you go online and say similar things about Suicide Squad, Batman v Superman or Justice League, you'll be met with venom, hostility and, in some cases, legitimate death threats. If you point out that critics and fans — at least according to Rotten Tomatoes and CinemaScore, which measure such things — are divided on the quality of these films, you'll be called names as polite as "Marvel shill," and the tenor only goes downwards from there. And don't even mention the grosses. (For the record, Justice League, at $94 million domestic in its opening weekend, grossed almost $100 million less than Avengers: Age of Ultron in the same context — and a hair less than Wonder Woman, despite having six heroes to just the one.)

Now, there's no way to know if Marvel fans would be so drunk with rage if the MCU had floundered out of the gate the way the DCEU is. But there might be something in this: Much of the DC identity lay, especially in the wake of 1984's one-two smash of Watchmen and The Dark Knight Returns, in the idea that gritty was cool. Dark was the way forward.

Marvel was always younger, jokier, poppier — Spider-Man's wisecracks; the X-Men's teen drama — while DC was none-more-black. When Tim Burton borrowed Frank Miller's pearls-scattering origin sequence, and in the process, became a genuine pop culture phenomenon, DC fans were thrilled. When Nolan leaned into the dark for his trilogy, they were ecstatic. Snyder picked up that ball and ran with it — right into a wall of mainstream audiences and critics who, perhaps, thought that the Man of Steel should spend less time in the shadows.

Maybe, just maybe, when the dark failed, the stalwart DC fan felt that anyone who tried to shine a light on why deserved whatever they got.

Tribalism is a shiny, beautiful double-edged sword. One stroke makes you feel at home with people who share your beliefs. It's where community comes from: Folks who can, together, push towards a common goal. The warm blanket of unity. But the other stroke brings its own kind of heat — a fury for anyone who doesn't agree. Who doesn't wear the right colors. Who doesn't toe the line and like the right stuff with the same full-throated cry.

Will DC and Warner Bros. find their footing? Maybe. Maybe not. I sure would like them to, because we're better off with the "distinguished competition" operating at the highest level. The rising tide lifts all boats. But a functioning fandom, like a functioning society, needs to be able to brook disagreements and embrace a plurality of opinions.

When you demand that everyone love what you love, in exactly the manner in which you love it, or suffer the consequences — real, lasting consequences — you've pushed past fandom and into fanaticism.

And a thing that was borne out of innocent childhood passion shouldn't be the cover for this much anger.