Why do Russian cosmonauts pee on a tire before space launches?

We all have our own odd traditions, and astronauts and cosmonauts are no different. In fact, you could even argue that since their jobs are a bit, well, high-stress, their traditions are proportionately weird. For example: in Russia, before the cosmonauts board their craft for blastoff, they make sure to pee on a tire. But why?

Before they climb the launch tower to board the Soyuz capsule that will take them into space, cosmonauts take a moment to stop at the right rear tire of the bus set to drive them to the launch site and ... relieve themselves. No, really. Here's a safe-for-work (though a bit crude) photo of the deed being done.

Potentially mind-blowing secrets of the universe could be exposed with new NASA missions
There’s life on Mars, says a scientist who thinks he found the evidence 40 years ago 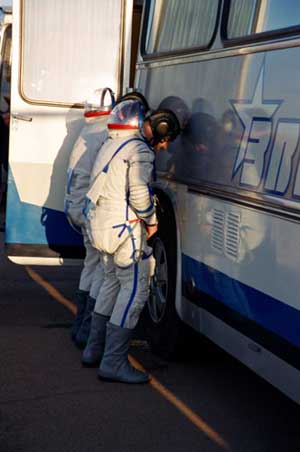 Female cosmonauts are, of course, not obligated to participate in this ritual, but they've been known to bring along their urine in vials ready to dump on the tire so they can be part of tradition anyway. But why do they do this in the first place?

Apparently it all goes back to Yuri Gagarin, the first man ever to undertake a spaceflight. Legend has it that he took a pitstop on the right rear tire of the bus taking him to the launch pad on April 12, 1961. Though it was probably done out of necessity and not the desire to start a quirky tradition, the man's a national hero, and other cosmonauts started to emulate him. Five decades later, they're still boldly going ... so to speak.

American astronauts also have a tradition tied to our first man in space, Alan Shepard, who completed his flight on May 5, 1961, less than a month after Gagarin. To this day, astronauts are known to order steak and scrambled eggs for breakfast the day of the flight, the same breakfast Shepard himself ordered. Sounds better than peeing on a tire, though if you've got a weak stomach you might want to skip the steak before your zero-gravity journey and go for the Russian method instead.