Fans clamored for the first Twilight movie despite its shortcomings (lighting, vampire makeup, etc.), but even those who aren't Twi-hards are in for a much better time with the second film, New Moon, which opens Friday.

At least that's the feeling of the stars: Kristen Stewart, Robert Pattinson and Taylor Lautner, as well as director Chris Weitz. All agree that the sequel, based on the second Twilight book by Stephenie Meyers, improves upon the original. (And check out our exclusive gallery of images from the film's world premiere in Hollywood on Monday, below this story.)

"When I read New Moon, it gave me ideas about how to play the first one," Pattinson said. "It's the one I connected to the most, and the one that humanized Edward for me the most as well. In the first one, he still does remain, from beginning to end, an idealistic character. But in the second one he makes a mistake that's acknowledged by everybody, including himself. Also, he is totally undermined by more powerful creatures, and he's undermined emotionally by people as well. I think that's what humanized it."

New Moon brings back the same characters, but with a new vision from a different director: Chris Weitz, who stepped in for Catherine Hardwicke. Weitz didn't want to do the same thing over again.

Weitz had ideas for different lighting, different visual effects, different camera moves and more. He gave the actors a 40-50-page syllabus full of his new directorial ideas. "What I really didn't want was sequelitis or the idea that we're just cranking out a franchise," Weitz said. "I wanted everyone to know what sort of movie we wanted to make."

Stewart, who plays Bella, said that Weitz's prep in part gave her a better idea of what to expect. "A lot of the effects movies are hard to do, because you don't know what you're reacting to," Stewart recalled. "So he had a full rundown of how he planned on making the movie. He was so sorry that so much of the movie was going to be CGI stuff that we were going to have to react to, but he was always going to make us aware of what we were acting with, that he was never going to leave us high and dry." 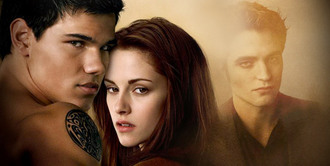 As for the romance in the new film, as fans know, it marks the breakup of Edward and Bella. "Just playing a scene where you're breaking up the ideal relationship, I felt a lot of the weight behind that," Pattinson said. "Also, it took away a fear of melodrama as well, because it felt kind of seismic, if that's the right word, even when we were doing it."

The torment challenged Stewart, too. "It was really hard to go back and forth, because you don't shoot a movie in sequence, obviously," she said. "I had to do stuff with Jacob where I was alive and happy and out of this depression thing, and then after lunch go back and scream in my bed for six hours. So that was difficult."

As for Jacob, it's been well documented how Lautner had to put on the muscles to play a bigger, badder Jacob for New Moon. "Jacob transforms a lot in New Moon, not only physically but mentally and emotionally as well," Lautner said. "So it was a matter of getting to the gym and eating the right food and a lot of it, but also reading and studying the book and my character over and over and over again so I could have his character down as well. He changes in many, many different ways. Basically, my job was to continue what I started in Twilight, which was this extremely happy, friendly, outgoing guy, best friends with Bella. I had to continue that for the first half of the film, but as soon as I transform, I snap, and I become a completely different person. I'm dealing with my issues, and it's really hard for me." 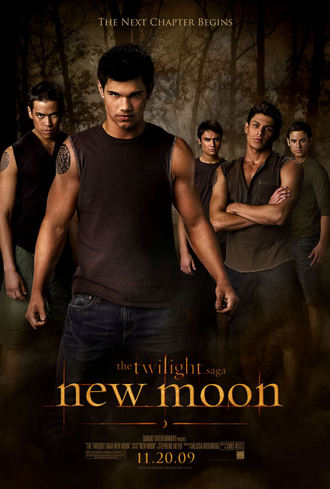 The big new effects in New Moon are the werewolves, and Lautner himself says they delivered. "I was blown away," Lautner said. "When I'm filming, the famous trailer shot where I'm running through the field, and I jump up and try and transform in midair, I'm attached to wires, and I'm running, and I let the wires pull me up in the air and jerk me to a stop, and I just have to freeze there and let them convert my body into a CGI wolf. The whole time I'm like, 'I hope I look cool.' After I saw the final version last week, after I saw the wolves, it was amazing. The fight scene that comes right after that, the fight between Jacob and Paul wolf was so cool. I thought they were extremely powerful and looked very real."

"The physical side was really fun," Lautner added. "Some of it was challenging. I'd never ridden a dirt bike before. I rode the dirt bike for a total of about five seconds in the film, but for those five seconds I had to look as cool as possible. So it did require a lot of practice, just for safety-wise, so they'd let me do it. The wirework, like when I run up the side of her house, the wires were there just so if I slipped and fell I didn't face-plant into the ground. That stunt was really complicated. You need to be 'on.' I'm using a little plug in the side of the wall to take off from and jump. Every single weekend I would practice that stunt for three hours a day. It was the last thing we filmed."

If that's not enough, New Moon has a much better soundtrack. "There were these incredible pickings on offer: Thom Yorke, The Killers, Bon Iver, Lykke Li," Weitz said. "I genuinely think it's one of the best soundtrack albums that's ever been done. The reason I will make this outrageous claim is that it's not music that was already completed. It's kind of easy to do that, but to be able to risk asking somebody to do a track and four weeks later or so a song comes back, to have it work as many times as it did was really extraordinary. I think that if any one of those artists had done a track for our soundtrack, I would have been really proud, but to have all of them is absolutely extraordinary."