Why Nightmare on Elm Street went back for more shooting

A Nightmare on Elm Street, the remake of Wes Craven's classic horror film, comes out in April, but Freddy Krueger himself—Jackie Earle Haley—was still hard at work over the holidays, shooting additional footage.

"We did do some re-shoots over the Christmas holidays, and I feel really good about that," Haley said in a group interview this week in Pasadena, Calif., where he was promoting his upcoming Fox TV show Human Target.

Re-shoots are relatively common, though they sometimes indicate problems with the initial production. That's not the case here, as there wasn't anything that needed to be fixed, just little additions to make scenes better. "Just some re-shoots and tweaks that I think are probably customary for pretty much every movie that gets made," Haley said.

The re-shoots included new shots for the film's signature dream sequences, in which Freddy torments the movie's teen sleepers. That required Haley again to wear Freddy's full burn makeup. "Yes, I was tortured all Christmas," he joked. 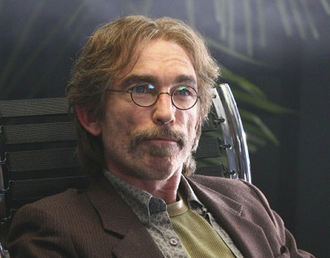 Early trailers for the film reveal a bit of the new Freddy's voice, but Haley said that the voice for the character is still in flux. He has been developing Freddy's voice throughout post-production, and he said that has continued since the latest trailer's release. "We're still working on it," Haley said. "There's still more [additional dialogue recording] stuff to do, so it's an ongoing process, I think, until it comes out."

One mystery remains for the new Nightmare: The trailers show the scene in which the parents of Elm Street hunt Freddy down and burn him alive while he protests his innocence. If indeed this Freddy was killed for crimes he did not commit, that would be a drastic change from the mythology from the 1984 original.

"You know, let's both go see the movie and get the answer there," Haley teased.