Why Shorts is Pulp Fiction for kids

Robert Rodriguez' new film Shorts is about a group of kids who get their town in trouble when they discover a rock that grants wishes. While the name doesn't seem to have much to do with its subject, Rodriguez said that it's actually related on multiple levels, thanks in no small part to the creative contributions of his son, Rebel.

"We had to come up with a name, ... and we decided to call it Shorts because, as my son explained, the stories are short, the kids are short, and they wear shorts," Rodriguez said in a news conference Saturday in Beverly Hills, Calif. "So [we said], 'OK, that's good enough—that will be our title for now, until we come up with a better one.' Which we never did. That's also the format that the story is told in: a series of shorts, and we tell them out of order, so it's like Pulp Fiction for kids, and you have to figure out the whole puzzle."

Rodriguez previously turned another of his children's ideas into a feature, the 2005 film The Adventures of Sharkboy and Lavagirl. But the writer-director said that the concept for Shorts combined their creativity with a few childhood fantasies of his own.

"It's not like we're at dinner and they're like, 'How about a movie about a creature,' and we're like, 'Nope, that's not good enough,'" Rodriguez said. "It was just that particular experience, and both of those times [with Shorts and Sharkboy], they had an idea that they couldn't get out of their heads, and I'm the one that kind of proposed to make it. He loves collecting rocks, and he kept saying, ... 'And then the rainbow rock ... ,' so I thought, 'What if it was a wishing rock?'

"That's how it got triggered," Rodriguez continued. "And over the course of a couple of years we kept coming up with ideas. I started thinking about old dreams that I had; I remember when I was a kid, I would be by my window, and I would put myself to sleep dreaming that these aliens would come down from the sky and give me a huge watch that could do anything. I could be invisible, I could do magic, I could do anything—and I got to put that into the movie, basically." 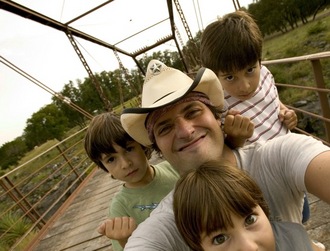 Interestingly, Rodriguez said his kids came up with the worst ideas when asked what they would wish for, which became a great source of inspiration for the film. "I tried the idea on them, and I asked Rebel, 'What would you wish for if you could wish for anything?'" he said. "And he said, 'I'd wish for a butt for a head.' So I said, 'Let me ask his older, wiser brother,' and he wished to be a potato. I thought, 'What's wrong with these guys?' I said, 'Well, what I would wish for is a million more wishes,' and their faces sort of dropped, like 'We just blew our wish.' They kind of got it. So I thought this would be such a great story—kids wouldn't know what to wish for or to make out of it. They would just screw everything up, so I thought you could have a lot of fun with that."

In terms of the film's episodic structure, Rodriguez said it returned him to his earliest filmmaking ventures. "I started making short films at the age of 12, and I always loved that format," he recalled. "I remember when Quentin [Tarantino] asked me to do Four Rooms, and I was like, 'That's what I do best!' I always wished I could do more, but there's just no place to do them. So when my third son [Rebel] came to me after Sharkboy and said, 'I want to come up with the next movie,' he [suggested] something like The Little Rascals, which I'd been showing them. They loved how short they were, and I was like, 'Of course—how come I never thought of that?'"