Why Survivors is the scariest post-apocalyptic show on TV

If there were a post-apocalyptic hall of fame for the best ways to annihilate humanity, super cooties would deserve its own wing. From the Black Death (which wiped out anywhere from 75 to 100 million people in the 1300s) to today's H1N1, pandemics are both fascinating and bone-chillingly scary for the majority of breathing people around the globe.

Of course the most creative people in our culture have taken the ubergerm idea and run with it, creating literary and film versions of such contagions, from Stephen King's Captain Trips in The Stand to the "rage" virus in Danny Boyle's 28 Days Later. And while some of the best pandemic cautionary tales have included supernatural twists that turn humans into zombified monsters or germ-mutated freaks, there's nothing like last year's worldwide swine flu pandemic to drive home the message that reality can be twice as terrifying as any made-up outbreak.

In light of that, executive producer Adrian Hodges' decision two years ago to re-imagine the BBC's Survivors—based on Terry Nation's '70s post-apocalyptic television series about a plague that kills 90 percent of the world's population—makes the man look absolutely prescient.

The United States gets to experience the chill of Survivors when it premieres on BBC America on Saturday at 8 p.m. ET/PT.

Hodges (Primeval) admitted in an exclusive phone interview from London this week that he had no clue that his reworked fiction would intersect so closely with reality. "When I was originally researching this, I spoke to a virologist, who was really cheerful, considering he worked in this area, and I was saying I was going to put this idea out there, but how credible is it? He said, 'Well not only is it very credible, it's going to happen.' I said I hoped not quite as bad, and he said probably not, but sooner or later it was going to happen. And then within a year or less, we had swine flu, H1N1. It really all seems more relevant than I even thought it was going to be."

The six-episode freshman season opens with a large portion of the U.K. suffering from an outbreak of the "European flu," a particularly potent influenza that quickly mutates and kills around the world. Hospitals and governments are no match for its wildfire propagation. In a matter of days, only a handful of survivors are left to navigate a new world without electricity, working cell towers, the Internet, plumbing—all of the creature comforts we've come to depend upon. As the series evolves, Abby Grant (Julie Graham), a mother out to find her young son Peter, travels around the country and connects with an eclectic assortment of survivors, from the unapologetic criminal Tom Price (Max Beesley) to an orphaned 11-year-old Muslim, Najid Hanif (Chahak Patel).

While Survivors explores familiar sci-fi territory, Hodges said he was adamant about grounding the show in reality. "There is a mystery plot, but even that is grounded in realism," Hodges said. "Obviously there is an element of science fiction, and there is an element of fantasy, but really and truthfully it is realistic in the sense that nothing in it is unbelievable in the sense of being fantastical. This isn't Lost. I greatly admire Lost, ... but this isn't a supernatural universe. It's the real world, and that's what interests me as a writer. I wanted to ask myself: 'How would I do? Would I be a hero or a coward? Would I be violent or would I be strong?' You don't know. Hopefully you never have to ask yourself that question. But the truth is we might one day, so you have to think about it. Most of us are never put in a position where we are really tested, and, of course, if something like this happened it really would be a case of finding out what you are made of. And that's what interests me most." 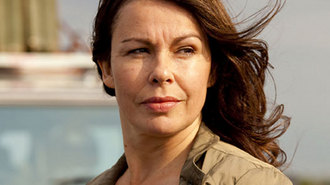 Hodges added: "In the first six episodes, it's very much about getting over the shock and grief and putting a new family together. Of course, like most families, these are people who really don't know each other. There are a lot of different characters in there, and you never entirely know who you can trust or what their secrets are, as we see with the Tom Price character. The stories are really interesting; like, if Abby will ever find her son, if he was ever even alive. Along with that, there is the mystery story of the [flu origin] lab, which we do much more with in the second season. But what really interested me was how you would get six or seven very different people together, how they would stay together and what friendships and enemies they make. It's also about what kind of normality you would be able to find when there is no more normality."

Hodges said it has been received differently in the light of world events. "I think [H1N1] has made it more real than I ever meant it to be, which is good and bad," he said. "It's not a documentary. I want people to be entertained about the adventure, but it has changed people's perceptions. I think people now think this could happen. It probably wouldn't happen as fast as in the show, and hopefully not quite as disastrously. But I think instead of people saying it's a science fiction idea, I think they are saying it could happen. I think now people take it more seriously."

Asked if he's learned anything about himself in the process of writing the series, Hodges said he's been shocked to recognize how dependent we all are on technology. "It's very thought-provoking," he mused. "We now are probably the most distant generation in the history of humankind from all the stuff that we used to do. Very few of us have any idea how to live off the land, or have any idea how to grow vegetables or raise animals. Even just 100 years ago most people knew how to grow things. One of the things that struck me very forcibly is that when I was looking at the original Survivors, which was made in 1974, there was very little technology in it. Even then they were closer to the past. But now in 2010, in 30 or 40 years, we've really moved hundreds of years in terms of human evolution, and not necessarily in a good direction."

Taking that lesson to heart, Hodges said he got in touch with his buried green thumb. "I am a lot more interested in growing vegetables than I used to be," he said with a laugh. "Since I started doing this, we started making a proper vegetable garden, and that is very satisfying and not as hard as I thought it was going to be. ... But I haven't become a survivalist."

For the latest sci-fi news, follow us on Twitter at @scifiwire
Tag: Adrian Hodges
Close Search Return to SYFY homepage.