Why Voyager's 1st Capt. thought she was a good fit (but wasn't)

Before Kate Mulgrew made Capt. Kathryn Janeway her own on Star Trek: Voyager, veteran French-Canadian actress Geneviève Bujold played the original Janeway—for about a day and a half. Now someone's unearthed a rare interview with the actress talking about her "new" Star Trek role.

The rare interview was conducted by the National Enquirer back in 1994, when the actress had just been cast. Here's what Bujold said about the role:

"I am very excited about starring in the new series" Bujold told the National Enquirer regarding Voyager.

"But I a must admit that I've never been a Trekkie. In fact, although I had heard of Star Trek, I had never seen any of the shows of films before now."

"I dont think I've ever seen a science fiction movie at all. But because of that I believe I'll be able to bring a freshness to this role. I'm studying Star Trek episodes the producers sent me so I can see how William Shatner and Patrick Stewart handled the role of captain, I want to do it right."

"This role is a challenge but it feels right. I am going where no woman has gone before."

"Fifty-two can bring the authority with it, yet you're still young enough to do everything that has to be done — and old enough to be wise.

"This role is a challenge, but it feels right. I'm going where no woman has gone before!"

Back in '94, the Enquirer reported that Bujold was picked by casting director Nan Dutton to play Capt. "Elizabeth" [in fact, Bujold's captain was actually named Nicole] Janeway. But the actress quit after a day and a half while filming the pilot episode "Caretaker."

When they hired Kate Mulgrew for the role—following Bujold's departure—Janeway's first name was changed to Kathryn on the actress' advice.

Rick Berman told TV Guide back in 1994 about the Canadian veteran movie actress that "It was immediately obvious it was not a good fit." Then in 2006 Berman tried to share a bit more light about Bujold's departure from the series, saying: "This was a woman who, in no way, was going to be able to deal with the rigors of episodic television."

You can have a look at the original Bujold interview below: 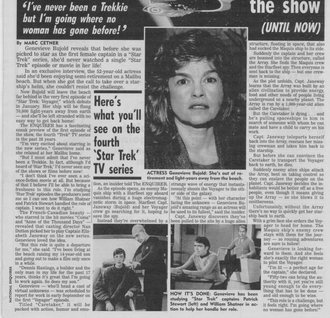 In the end, Mulgrew proved to be the inspired casting choice, playing the first female Starfleet captain in command of her own starship on a Star Trek TV series with poise and strength. Mulgrew's Janeway was a strong captain who had to make some hard choices in order to finally bring her crew back home from the Borg-infested Delta Quadrant.

(Trek in Sci-fi forum via Trek Web and Memory Alpha)