Why ABC's not giving up on V and FlashForward. Yet

Fans of ABC's sci-fi series FlashForward and V have been concerned both with the network's decision to delay both shows' spring returns until March and with whether the network continues to have confidence in them, but ABC Entertainment Group President Stephen McPherson assured reporters on Tuesday that he has a clear plan for building both shows' audiences, with two different strategies.

In a press conference at the Television Critics Association's winter press tour in Pasadena, Calif., McPherson said he decided it was important to air FlashForward with no repeats, following the network's strategy for Lost's later seasons.

For V, he clarified that the plan was always to tell the story in chapters, but that the first chapter got shortened to only four episodes because of production issues.

"The original [1984-'85] V was two minis and then a series," McPherson said in a group interview later. "The two minis did incredibly well, and the series did not do as well. Now there was a huge creative change between those two, but I think as long as you market them appropriately, I do think the audience is willing to come in for chapters."

McPherson brought in producer Scott Rosenbaum to join the V creative team. "Scott has really got a vision for what that needs to be," McPherson said. "Those shows are always about 'How do you balance character with concept?' Obviously, it's a huge concept, but I think we were getting away early on, and the reason we put a stop to things is we were getting away from having a real character drive throughout. It was just literally burning through concept story, and I think he has a real sense of how this can have chapters, what each of those chapters will be, much the way Lost has been, certainly, in the past few years. They look at a season and they say, 'Here's the beginning, middle and end of the season.' Maybe they'll learn something from that and bring their own thing to it."

Last week, FlashForward co-creator and executive producer David Goyer told reporters that he had already pitched the network a second-season storyline for the show, and on Tuesday McPherson confirmed that he has high hopes for the show to persevere and return next season.

"[Its prospects are] really good," McPherson said. "We love the show. David's been fantastic. He was talking about season two when he pitched the show. He's had such a kind of long-term vision for it. That was one of the things that made us comfortable about it. So we're excited to be able to air consecutive episodes. I think as much as taking the break has its downside, I think the ability to really take a beat after this fall launch, adjust some things, make some changes and move forward is great."

Genre fans may not entirely trust ABC after it quickly wrapped up Life on Mars and buried Defying Gravity in the summer. With low ratings, the network canceled Gravity even before it reached a conclusion. At least McPherson promised he won't make the same mistakes with V and FlashForward. 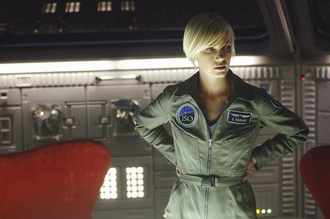 "Defying Gravity was an acquisition that we made, and we liked it, too," he explained. "It was also a really good business for us, because it was a low-cost production. I think the summer is tough in general. We're going to be doing more scripted this summer, and I think we have to use the end of the season as part of the summer in terms of launching. I think you can't end your season, have all these big finales and then be like, 'We'll be back in a couple weeks with the summer.' I think we really have to make that one smooth transition. They were lost in the end in that kind of lull."

Would he have given Gravity a fall slot if he could do it all over? "That had to do with the entire business plan around it, so we couldn't have done anything else with that show, but we look at everything when they don't work," he said.

FlashForward returns March 18. McPherson said he is still figuring out whether V will return on March 16 or March 23.

Do you believe ABC will stick with these shows or bury them?