Why Bryan Fuller thinks Heroes is back, and what about Star Trek?

Bryan Fuller believes there's going to be "a new spirit" in the fourth season on NBC's sci-fi series Heroes when it comes to "Volume Five: Redemption." "Everybody has gotten really invested in the show, and we're going back to the basics of the characters," Fuller told SCI FI Wire in an exclusive interview. (Spoilers ahead!)

The season-three finale left Nathan Petrelli (Adrian Pasdar) dead and the shape-shifting Sylar (Zachary Quinto) believing he was Nathan. The final moments of the finale finished with the opening of "Volume Five: Redemption," which hinted that the Sylar/Nathan situation might offer some challenges in the future for our heroes.

Bryan Fuller: How Pushing Daisies ends—and how it was supposed to end
How Hannibal pushed network TV sex scene boundaries

"That's going to prove really interesting for a lot of the characters," Fuller said. "I'm just excited about getting back to the basics and getting back to the real world and seeing what it's like for HRG [Jack Coleman] to try to re-create a company when every version of it has failed in the past. And not only doing that, but going through a divorce and trying to hold his family together. And for every plot conceit that we have for a character, we have even more conceits for what's going on in their personal lives that makes their plot story so much more complicated, because their emotional, personal story is so intrinsically tied with what's happening with them. I like the balance of the personal lives that we're telling this season."

The cast will return, including Pasdar and Quinto. "We love the cast. That's the thing. ... We just sort of have to find better uses for them," Fuller said. They will also be adding some new characters who will be introduced later in the season.

Fuller wrote and co-executive-produced Heroes in its first year, and then left to work on his own creation, ABC's Pushing Daisies. When that show was canceled last season, he returned to Heroes as a writer and consulting producer.

He believes every volume of the superhero series "has been valid, and every one has been a slightly different style, which I think is interesting. I love how the show is continuing to grow. It is evolving, and I do think there is a lot of good stuff in 'Fugitives' and 'Redemption,'" Fuller said.

In "Fugitives," "we saw the characters in situations we hadn't seen them in before and got to find out interesting things about those characters," Fuller added. "So what I'm excited about with season four is getting everybody back to the basic principle of ordinary people in an extraordinary world and how these characters are relatable to us and what we would do if we were in their situations, and really grounding it in that conceit."

This fall Heroes moves to Mondays at 8 p.m. ET/PT. While the number of total episodes ordered for Heroes has changed, it looks like NBC has settled on 19 episodes, which will run consecutively with the season ending just before the Winter Olympics in February. After the Olympics in March, NBC's Chuck will take over the Monday-night timeslot. 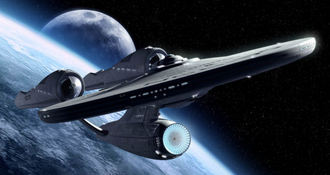 For most writer/producers, working on one television series would be enough. But the busy Fuller can't help himself. Beyond digging into season four of Heroes, he's creating a comic-book series for his canceled ABC series, Pushing Daisies, and dreaming about how much he'd like to be a part of doing a new Star Trek series. "Oh, my God, I would love to do a Star Trek series! I would love it," he said.

"I think Star Trek, since it did so well in the theaters and the movie's wonderful, I think that a Star Trek TV series is probably a couple years away, just to let the feature franchise breathe," Fuller added.

While Fuller is happily committed to Heroes, he does hope things might work out just right if and when Star Trek returns in some form to the small screen. "I'm hoping that by the time they're ready to do a television series that I am available and can participate, because, I mean, even if it's J.J. Abrams' team, I would love to join that team for a new Star Trek series. I think it would be a ball," Fuller said.

And what would a new Star Trek series look like? "I love the aesthetics of the new movie," Fuller said. "I think it has to be set in that world, ... but I think it has to be a different ship than the Enterprise. I think the Enterprise has to be sailing on the silver screen, and I think we need a new ship with a new crew and an entirely new adventure that is in the timeline and the aesthetic of the movie, but it's telling a different story."